What should my investment strategy be right now if a recession is imminent?

While you could be in cash 100 percent right now, you would not have any earnings on your investments. In fact, you’d be losing about 2 percent annually due to inflation. So that’s not a very good strategy.

While it is probable that there will not be a recession in the next few months, if we created a strategy that assumed the worse, we might miss the opportunities for some great earnings in the meantime.

So this is what I recommend as an overall strategy:

I only cite Schwab because I happen to be a client. Other brokerage firms such as Vanguard and Fidelity offer the same type of information and services.

The buy and hold strategies that you hear about are not what I recommend. Read Ken Moraif’s book Buy, Hold, and Sell, to get you started with this philosophy. Why would you hold during a bear market and lose 50 percent of your portfolio’s value?

One of the key things to remember is that most of the “prophets” and talking heads of the media are just noise. Learn enough to make your own decisions.
- October 31, 2019 No comments:
Email ThisBlogThis!Share to TwitterShare to FacebookShare to Pinterest
Labels: Economics, Investing, Markets

Should I Day-Trade ETFs? Probably Not.

The great majority of ETFs are not designed for day-trading. I like to use them for longer-term trades (months to years), especially ones that pay monthly distributions.
There are some leveraged ETFs that I’ve used for shorter term trades (hours to days). I still don’t view these as specific day trades, which I define as trades that are never held from session to session; for example, the NYSE closes at 3 pm CDT, so all positions must be closed before that time.
For example, you could use SPXL and SPXS to trade the S&P 500. These ETFs are leveraged 3X the overall market. For example, if the S&P 500 increases by 1 point, SPXL should increase by 3 points. Generally, these two ETFs track the market very well.
There are other leveraged ETFs for almost any asset class; for example, OILU for a bullish 3X Crude Oil trade.
If I’m going to actually day-trade an asset, I’ll trade the futures market, which is highly leveraged and highly volatile. I would not suggest you trade in this market unless you’ve gotten some professional training first. It’s very easy to lose a lot of money in a very short time if you don’t know what you’re doing.
My best gains have come from looking at longer-term trading, such as days to weeks or months. For example, I recently traded CAT, buying at 115 and selling at 128 for an 11.3 percent gain. I was in the trade for three weeks.
I also did a recent trade in energy, using the following ETFs: ACES, FENY, TAN, XES, and XOP. I invested $5,000 in each one and used trailing stops to manage my risk. I was eventually stopped out between 2 and 4 weeks in each position for a total profit of $1,345. While that may seem small at only 5.3%, if you do that once a month, you’ve made a 60 percent gain.
I use two methods to gauge where and when I’ll enter a trade: 13–34 Moving Average crossovers and Fibonacci Retracements and Extensions. (Google these terms for in-depth coverage, or watch the following two videos for an introduction:

Be careful. Learn all you can. Practice with “fake” money before you invest. Have a plan and stick to it. Learn risk management. Use stops. Always. Have fun.
Happy investing.
- October 30, 2019 No comments:
Email ThisBlogThis!Share to TwitterShare to FacebookShare to Pinterest
Labels: Investing, Money, Trades

On a three-week road trip, and the price of gas

I just spent three weeks on vacation, and drove 4,100 miles round-trip from Austin, TX to Traverse City, MI, with side trips to Ann Arbor and Petoskey.

I drove through Texas, Oklahoma, Missouri, Illinois, Indiana and Michigan. As the trip progressed, I paid increasingly higher prices for gasoline, from about $2.15 in Texas and Oklahoma, to $2.50 in Illinois, and $2.60 to $2.75 in Michigan.

There are three factors that drive the price of gasoline at the pump: The price of oil, the amount of taxes per gallon, and the distance from refineries.

As you'd expect, Texas and Oklahoma have lower gas taxes (by as much as 50%) and are much closer to refineries, driving down the cost of transportation.

What I find interesting -- though everyone likes to complain about the high price of gasoline at the pump -- is that gas is not that expensive, if you factor in inflation. In 1968, while I was in high school, I could buy gas for 30 cents a gallon. If you factor in inflation, that is $2.21 per gallon in today's dollars. See Inflation Calculator. 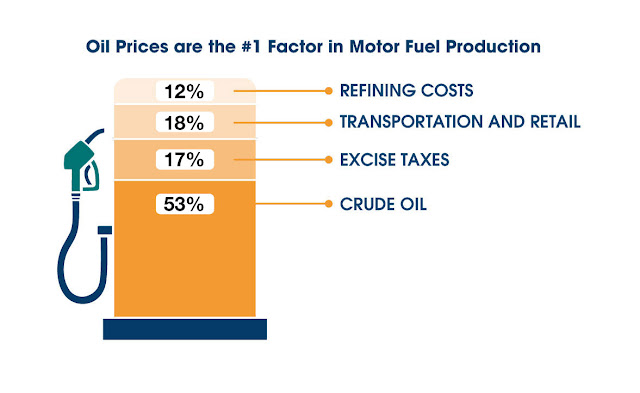 Some more information on gas prices and energy markets: