Former U.S. Senator Timothy Wirth (D-CO), then representing the Clinton Administration as U.S. undersecretary of state for global issues, joined in by saying:

The entire history of the movement is quite interesting, when you dive under the covers to seek what is beyond that which is reported in the main-stream media. And it takes courage for scientists and politicians to take an opposing view, or what the climate change activists call "climate-deniers." But then, no one is denying that the climate is -- and has for million of years -- changing.

If we fast-forward through the Al Gore era (curiously silent since all of his predictions of doom never came true) and the Paris Climate Accords and land in today's world of Alexandria Ocasio-Cortez (AOC) and her Green New Deal we find, that beyond the scare tactics of "we're all going to die in 12 years," her true motive is change our democratic, free-market economy into a government-run socialist system.

Saikat Chakrabarti, AOC's chief of staff, made the following admission to the Washington Post:

Just forget the fact that a political action committee founded by AOC and Chakrabarti is under investigation for the illegal diversion of campaign funds (6), but I digress.

In attendance at the Washington Post interview was Sam Ricketts, climate director for Washington Gov. Jay Inslee (D), who is running for president almost exclusively on a platform of combating global warming.

Ricketts said, "It is both rising to the challenge that is existential around climate and it is building an economy that contains more prosperity. More sustainability in that prosperity — and more broadly shared prosperity, equability and justice throughout."

So it's really not about climate. It's about economics, or as the left calls it, economic justice, which means equality of outcome, not equality of opportunity. Even Chakrabarti admits, "So if it turns out that our hypothesis is wrong, that just means we need a different strategy." (7)

If climate change is wrong, then they'll have to find another scare tactic to convince us all that socialism will solve all of our injustices.

In fact, the entire democratic field is running for president on the fallacy that the middle class is withering away, which I talk about here.

But if you pay attention, you'll find that there are many who are openly advocating the overthrow of capitalism and putting private corporations under public control. This is socialism.

"Rapid and equitable decarbonization, then, means putting these corporations under public control—i.e., nationalizing them, through buying out the majority of their shares...This assault on private property will no doubt trigger fierce resistance from elites. To overcome this opposition, we will need a massive, organized anti-capitalist movement." (8)

Ashley Dawson in the article above claims that buying of all the shares of these corporations would cost $1.3 trillion. Yet the capitalization the NYSE is $30.1 trillion as of February 2018. It's higher today. When even university professors at Stanford call for this type of radical action, is resistance futile?

No. Because all of these so-called advocates of socialism ignore the basic truth of economics. I say "so-called" because I'm not really sure they even understand what socialism is, referring to large free-market welfare economies like Denmark as socialist, which they are not. Dan Mitchell asks an important question in his article about democratic socialism. You should pay attention.

The underlying principle is the "progressive" movement's long-time desire for an elite to control the masses.

"Climate change is real and deserves our attention. But not every policy to address it can be taken seriously. Take, for example, the Green New Deal – a sweeping proposal to “save our planet” that reads more like a parody of the progressive agenda. No laughing matter, however, is the proposal’s ultimate objective: to give government unprecedented power over people’s lives and our entire economy.
…

Other aspects of the Green New Deal seem wildly out of place for an environmental resolution. Consider the promise of massive new entitlement programs that could only be achieved through a radical redistribution of wealth. Here, the proposal shows its true colors. This is not some run-of-the-mill progressive policy – it is a Trojan Horse for socialism.

The Green New Deal aims to upend our entire economic system, wresting consumer choice from everyday Americans and putting personal decisions – from the food we eat to the cars we drive – in the hands of an unelected elite." (9)

The claim that the Green New Deal would revive the economy (10) is just not true. Environmental quality is a product of prosperity, which has exploded upon the world since 1820. This is caused by three things: economic freedom with stable institutions, the protection of private property rights (including intellectual property) and the rule of law. (11) (12).

"… From the year 1000 to 1820, growth was predominately extensive. Most of the GDP increase went to accommodate a four-fold increase in population. The advance in per capita income was a slow crawl – the world average increased by half over a period of eight centuries.

In the year 1000, the average infant could expect to live about 24 years. A third died in the firs year of life. Hunger and epidemic disease ravaged the survivors. By 1820, life expectation had risen to 36 years in the west, with only marginal improvement elsewhere.

What happened after 1820? Capitalism, innovation, rule of law, protection of private property, democracy on scale never seen before. All the things the "progressive" left-wing love to hate.

One of the reasons cited for the need for this Green New Deal is that unrestrained climate change will cost the U.S. economy $500 billion in the year 2100. Yet if you project the U.S. GDP through the remainder of the century that's about .05 percent of the economy. To implement the Green New Deal is said to cost about $93 trillion (other figures place it at $43 trillion). So why do we need to spend all those trillions in the first place? One reason AOC cites is a "four-decade trend of wage stagnation." (14). As if those trillions will raise wages.

The problem? The wage narrative, as Bloomberg recently pointed out, is a myth. As in not true. Although wages flattened briefly in the mid-1990s, they have grown steadily since, according to Federal Reserve data. (15) So the underlying reason for the New Green Deal is the radical alteration of our economic system. 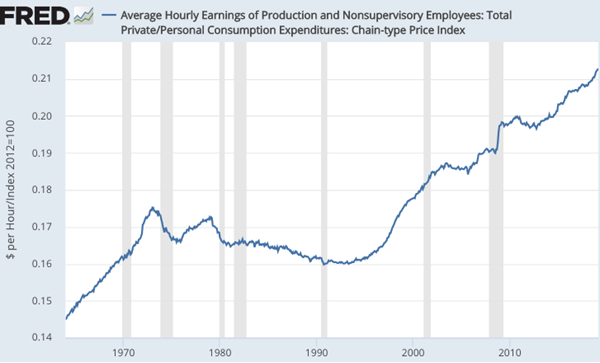 While I won't go into details here, since you can read all about socialism here, and here, and here. It's not a system of government that most people would embrace, though many think it's more fair than capitalism (though defining what's fair is subjective). Socialism -- or Marxism if you will -- has not worked very well when tried. If you really want to dive deep into the Mises school, try this out.

It will be interesting -- and possibly frightening -- to see how this plays out in the public arena. I believe the great majority of Americans will reject these ideas once they fully know the truth (if this can happen is another great question). It's hard for people to accept the truth when their belief systems have been molded by repeated myths over the years.

This is the challenge for our time.

1. The Heartland Institute: About the IPCC. http://climatechangereconsidered.org/about-the-ipcc/

8. Dawson, Ashley (2019). We Can't Beat Climate Change Under Capitalism. Socialism is the Only Way. http://inthesetimes.com/article/21837/socialism-anti-capitalism-economic-reform

12. Bernstein, William J. (2004). The Birth of Plenty: How the Prosperity of the Modern World Was Created. McGraw-Hill.