Crude Oil and Energy Investing - Where to Now?

Over the last few months, I've moved funds from my cash positions into the energy sector. My strategy is to buy quality at low prices while collecting the dividends as my strategy is long-term (3 to 5 years).

All in, the oil sector looks like a terrible place to invest today. Unless, of course, the company you buy has the financial strength to keep investing in any environment and the track record to prove that it can and will do just that. Which is where Exxon and Chevron come in. These two industry giants have long histories of navigating the oil industry's ups and downs with relative ease. One place to see that is in their dividends, with each having increased their disbursements annually for more than three decades. Clearly, these companies know how to deal with industry downturns while still rewarding investors.

That is largely because they don't focus on short-term gyrations, instead looking to the long-term supply/demand dynamics of the industry. They know that a company has to have the financial strength to muddle through the downturns, often investing during the weakest moments, so that they can thrive during the upturns. To that end, Exxon and Chevron have two of the strongest balance sheets in the energy sector, with financial debt-to-equity ratios in the 0.15 times space -- which would be a low number for any industry. Essentially, they have the financial strength to take on extra debt during a downturn without putting their long-term viability at risk.

That basically means that Exxon and Chevron can outlast smaller players that take on greater financial risks by leveraging up their balance sheets. But this process is taking longer today because of the low interest rate environment. However, there's a good side to this because it is creating a huge opportunity for dividend investors who are willing to think long-term along with Exxon and Chevron. To put a number on it, their dividend yields, at 5.7% and 4.6%, respectively, are near their highest levels over the last 20 years.

An ETF that takes advantage of Exxon and Chevron is VDE, Vanguard Energy. The VDE ETF has an over 39.5% exposure to two of the world's leading oil companies: Exxon Mobile (XOM) and Chevron (CVX), VDE has net assets of $3.41 billion, trades an average of 558,819 shares each day, and charges an inexpensive expense ratio of 0.10%. The blended dividend yield of the ETF was at 3.87% at the end of last week at the $72.19 per share level. The chart below shows the top 10 holdings of VDE. 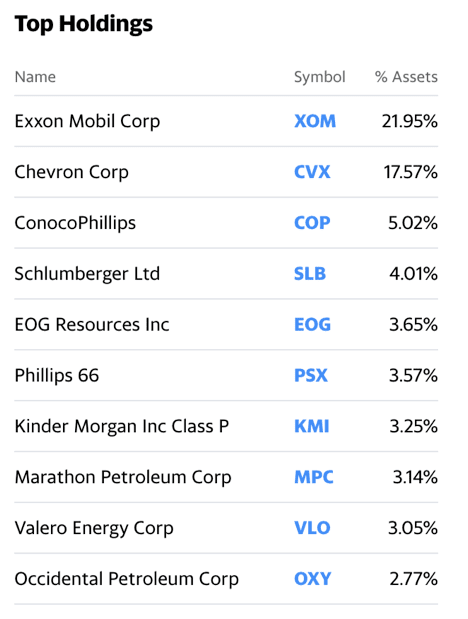 I am not wildly bullish on the price of crude oil as it approaches $55 on NYMEX futures and $60 on Brent. However, I believe that sector rotation in oil-related shares remains long overdue.

Two other ETFs to consider are FENY and IEZ.

(Disclosure: I have positions in VDE, FENY and IEZ)