The World Rises Out of Extreme Poverty

Between 1750 and 1820, capitalism had its start in the Western World. It would prove to bring more prosperity than had ever been known -- ever.
In 1800, 90% of the world's population lived in extreme poverty. In 2019, 10% did. During this 220 year span, 80% of the population of Earth rose out of extreme poverty.
According to the World Bank, people living in poverty have access to shelter, food, clean water, and basic services provided by the government or private entities. On the other hand, people who live in extreme poverty are severely deprived of basic human needs and often do not have access to service aids.

India's rise out of poverty is also impressive, though it started progressing earlier than China and has maintained a somewhat slower pace.

The largest country whose population still mostly falls below the extreme poverty line is the Democratic Republic of Congo, which though it has grown significantly in population, has fallen back behind other countries in its region in recent decades.
World GDP per capita was essentially flat for 2,000 years. It began increasing during and after the Enlightenment. Beginning about 1820, the rate exploded. 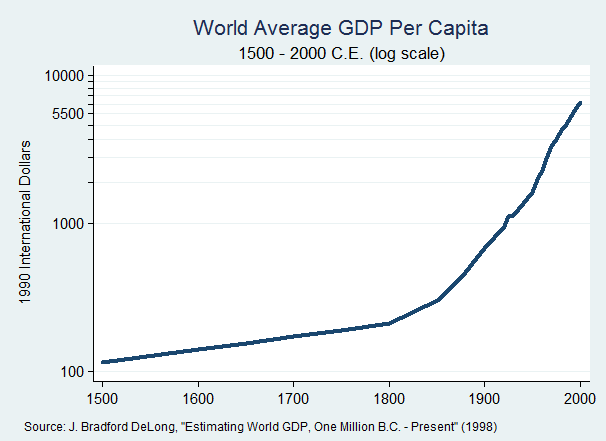