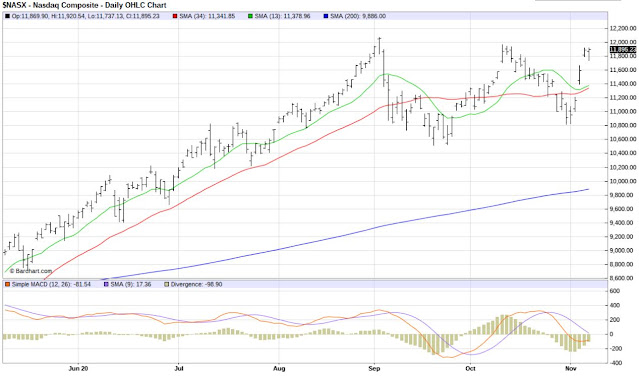 The ISM Manufacturing Index shot up 3.9 points in October to 59.3, its highest level since September 2018, and above the consensus of 56.0, as factory activity gained significant momentum. It was the biggest increase since May 2009, excluding the post-lockdown surge in June. Of the 18 ISM industries, 15 expanded, matching the highest number since March 2019, and indicating broad-based growth. The report also noted that five of the six largest industries posted strong growth. The ISM index is bullish for manufacturing output and broad economic growth.

Total U.S. bankruptcy filing ticked up only 1.4% in Q3 to 126,243, the third lowest level on record. There was a slight increase in business filings, up 7.1% to 5,521, but that was also close to historic lows. As we discussed in the 10/20/2020 U.S. Focus, the low level of bankruptcy fillings is partly due to the large monetary and fiscal stimulus, which extended a lifeline to both households and businesses struggling with the fallout from the pandemic. But with fiscal stimulus waning and bank lending standards tightening significantly, we could see a rise in bankruptcy filings late this year and into 2021.

Factory orders increased 1.1% in September, up for the fifth consecutive month, and slightly above the consensus of 1.0%. Nondurable goods orders ticked up 0.3%, while durable goods orders rose 1.9%, unchanged from the advance estimate. The increase in durables was led by transportation equipment, as civilian aircraft orders turned positive again. Nondefense capital goods orders ex-aircraft, a proxy for capex, rose 1.0%, also its fifth consecutive gain, although the smallest in that sequence.

On a y/y trend basis, factory orders declined 5.1%, led by a steeper slide in nondurables. However, the negative momentum has diminished in the past several months, in tandem with the improvement in the ISM Manufacturing Index, signaling a strengthening of factory activity.

US Crude Inventories Fall the Most in 2 Months (Nov. 4, 2020)
US crude oil inventories fell by 7.998 million barrels in the week ended October 30th 2020, following a 4.32 million rise in the previous period and compared to market expectations of a 0.89 million increase, according to the EIA Petroleum Status Report. That was the steepest decline in crude stocks since the week ended August 28th. Meantime, gasoline inventories were up by 1.541 million barrels, while markets had forecast a drop of 0.871 million. 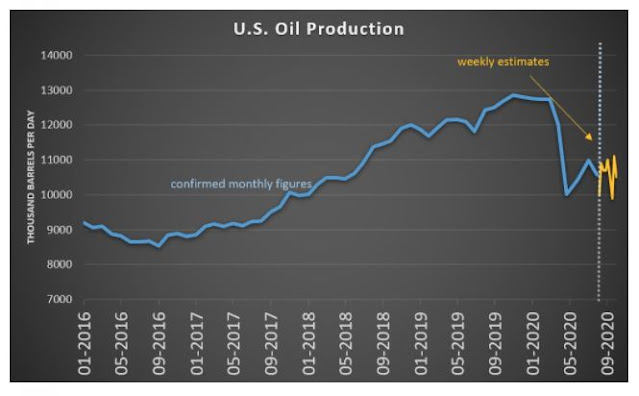 ISM services activity moderates slightly (Nov. 4, 2020)
The ISM Non-Manufacturing Index (NMI) gave back 1.2 points in October to 56.6, below the consensus of 57.5, as services activity grew for the fifth consecutive month but at a slower pace. The pullback comes amid a resurgence of COVID cases nationwide, which may lead to reduced mobility and disengagement of consumers from the economy, potentially weighing on the pace of the recovery.
ADP payrolls recovery slows (Nov. 4, 2020)
ADP private payrolls increased 365,000 in October, up for the sixth consecutive month, but below the consensus of 600,000. It was the smallest gain in the past three months, as companies have slowed the pace of hiring amid a new resurgence of COVID cases. So far, ADP payrolls have recovered 49% of the loss in March and April, as coming back from the lockdown is proving difficult amid the continuing health crisis.
Trade deficit narrows (Nov. 4, 2020)
The trade deficit narrowed by $3.2 billion in September to $63.9 billion, close to the consensus of $63.6 billion. Exports rose 2.6%, led by soybeans and capital goods, partly due to increased flows to China under the phase-one trade deal. Imports inched up 0.5%, as a notable increase in vehicles was partly offset by a decrease in imports of consumer goods and some industrial supplies and materials.
Despite narrowing in September, the trade deficit increased in Q3 to its highest level in 14 years. On a 12-month total basis, it widened to its highest level since March 2009.
The 12-month total deficit with China continued to narrow to its smallest level since March 2012. But the deficit with some other trading regions widened, including with NICs, where it reached its highest level since March 1988. This implies that the trade war with China has shifted U.S. imports from China to other countries, but not necessarily bringing production back to the U.S.
Natural Gas inventory draw tops estimates (Nov. 5, 2020)
EIA Natural Gas Inventory: -36 bcf vs. -26 bcf consensus. Last week saw a 29 bcf increase.
A cyclical surge in productivity (Nov. 5, 2020)
Nonfarm productivity increased at a 4.9% annual rate in Q3, below the consensus of 7.2%. It followed a 10.6% surge in Q2, resulting in the biggest two-quarter increase since Q4 1965, as lockdowns ended and fiscal and monetary stimulus filtered through to the economy. Both nonfarm output and hours worked rebounded at record rates in Q3, but output outpaced hours. Manufacturing productivity jumped at a record 19.0% annual rate.
Fewer layoffs, but levels still above pre-recession (Nov. 5, 2020)
Challenger layoff announcements fell 32.1% in October to 80,666, but that was still greater than pre-recession, and near the highest level since July 2015. Year-to-date, there have been 2.163 million job cuts announced, the highest annual total on record. The bulk of announcements was still in the leisure and hospitality and retail sectors. On a 12-month average basis, job cut plans were at a record high, reflecting the large displacement of labor earlier this year.
Initial jobless claims fell 7,000 last week to 751,000, above the consensus of 741,000. Continuing claims in the prior week declined 538,000 to 7.285 million, while the insured jobless rate slipped to 5.0% from 5.3%. Despite the improvement, all these indicators continue to run several times higher than pre-recession. Moreover, a total of 21.509 million people continued to received some form of unemployment assistance, as labor market conditions are far from normal.
Light vehicle sales hit a ceiling (Nov. 5, 2020)
Light vehicle sales fell 0.5% in October, its first decline in six months, to a 16.2 million unit annual rate. While the sales rate has nearly doubled since the trough in April, it is still 3.3% short of what it was in February. Light truck sales pulled back last month, partly offset by higher auto sales. On a y/y basis, light vehicle sales were down 3.3%.
Fed keeps monetary policy steady (Nov. 5, 2020)
In a unanimous vote, the Federal Open Market Committee (FOMC) announced no change to the fed funds rate—which remains in a range of 0% to 0.25%—or asset purchases—which remain at $80 billion of Treasuries and $40 billion of agency mortgage-backed securities (MBS) each month. In its statement, the FOMC noted: “Economic activity and employment have continued to recover but remain well below their levels at the beginning of the year.” That sentence was a slight tweak relative to the September FOMC statement, which noted that the economy and jobs had “picked up in recent months.” The Committee also removed the prior language about its easy monetary policies not being an “unconditional commitment.”
Rig count rises again (Nov. 6, 2020)
Total active drilling rigs in the U.S. increased for the eighth week in a row, up 4 to 300, according to the latest report from Baker Hughes. U.S. oil rigs added 5 to 226, while gas rigs fell by 1 to 71 and 3 rigs remain classified as miscellaneous. Half the week's increase in oil rigs is in the Permian Basin, where units rose by 5 to 146.

Labor market recovery continues (Nov. 6, 2020)
Once again, the employment report exceeded forecasts. Nonfarm payrolls recovered a net of 638,000 jobs in October, above the consensus of 530,000. The gap between the private and public sectors continued to grow. Private sector payrolls increased by 906,000, above our estimate of 745,000. Government payrolls shrank by 268,000, which included a reduction of 147,000 temporary Census jobs. The remainder of the public job cuts were in education. The unemployment rate tumbled one full point to 6.9%, below the consensus of 7.7% and our projection of 7.4%. Under a divided government scenario, the chances of getting a large stimulus bill through, following this report, is small. But certain industries, municipalities, and workers could use additional support. That will put pressure on the Fed to do more with its asset purchases and extend the expiration date of the Municipal Liquidity Facility.
Wholesale inventories increase (Nov. 6, 2020)
Wholesale inventories increased 0.4% in September, its second consecutive gain, and contrary to the consensus of -0.1%. It was led by nondurable goods (mostly farm products, drugs, and petroleum). The revival in import growth suggests wholesale inventories will continue to increase in the near-term, which is positive for economic growth in the early months of expansions. Wholesale sales rose 0.1%. As a result the I/S ratio was unchanged at 1.31, basically where it was pre-recession.
Used car prices continue to rise (Nov. 6, 2020)
The Manheim Used Vehicle Value Index ticked up 0.4% in October, but was up 15.4% y/y, near its fastest pace since January 2010. Prices rose from a year ago across all major market segments, with luxury cars and pickup trucks outperforming the overall market. The increase in wholesale used car values suggests sustained upward pressure on the CPI for used cars and trucks in the near-term.
- November 06, 2020
Email ThisBlogThis!Share to TwitterShare to FacebookShare to Pinterest
Labels: Economics