Six months ago, any inflation was supposed to be transitory, meaning just temporary. But it seems to persist. I also think it's very strange that the government also reports inflation minues "food and energy." Do these people not live in the real world? Anyone know of a family budget that doesn't have a large part taken by "food and energy?" Anyway, I digress.

The Consumer Price Index (CPI) rose 0.9% month-over-month (m/m) in October, above the Bloomberg consensus estimate of a 0.6% increase. The core rate, which strips out food and energy, increased 0.6% m/m, above the 0.4% expected, and following September's unadjusted 0.2% rise. Y/Y, prices were 6.2% higher for the headline rate, north of forecasted 5.9% rise and the quickest acceleration in 30 years. The core rate was up 4.6% y/y, above the projected 4.3% gain and August's unrevised 4.0% increase.

The Bureau of Labor Statistics (BLS) said that the monthly all-items increase was broad based, and the components for energy, shelter, food, used cars and trucks, and new vehicles were among the larger contributors. Energy rose 30.0% over the last 12 months, and food increased 5.3%. 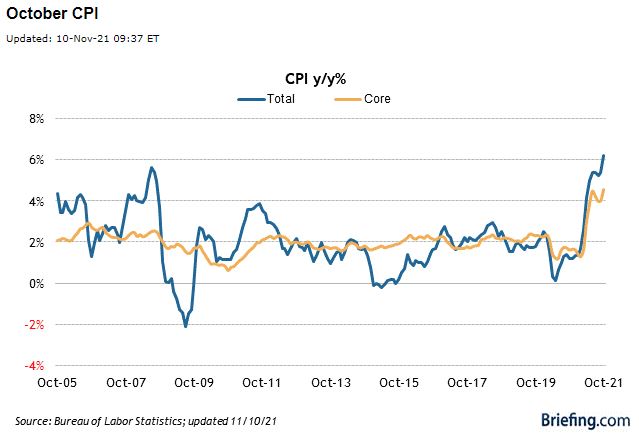