National Debt at $31 Trillion: Does Anyone Care?

Our national debt has soared to a record $31.3 trillion. Yet our federal budget deficit fell sharply in fiscal year 2022. The national debt continued to rise in FY2022 because the government spent more money than it received in revenues.

The budget deficit for FY2022 fell sharply because federal spending to fight the COVID-19 pandemic declined significantly, but it was still a large deficit. The budget shortfall declined to $1.375 trillion, compared to the 2021 deficit of $2.776 trillion.

President Biden has been trying to take credit for the huge decline in the budget deficit, but in fact his policies prevented the budget deficit from falling even further. America's growing national debt is the result of simple math — each year, there is a mismatch between spending and revenues. When the federal government spends more than it takes in, we have to borrow money to cover that annual deficit. And each year’s deficit adds to our growing national debt.

Historically, our largest budget deficits were caused by increased spending around national emergencies like major wars or the Great Depression.

Today, our deficits are caused mainly by predictable structural factors: our aging baby-boom generation, rising healthcare costs and a tax system that does not bring in enough money to pay for what the government has promised its citizens. 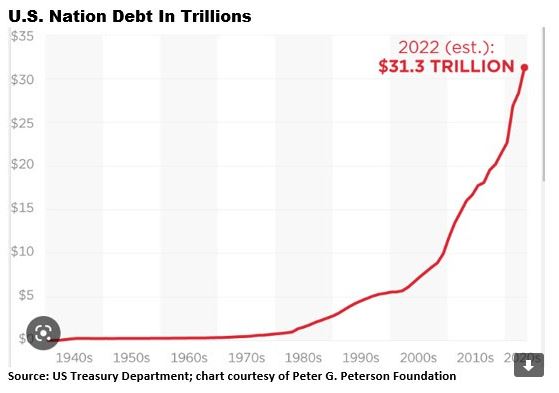