Just hold your horses there buddy. Markets may open slightly lower this morning. But, someone is having a party. As summarized by Barron's last night:

Jubilation. Stock indexes worldwide followed up one of their best weeks of trading in seven years with another day of gains. President Donald Trump and his Chinese counterpart Xi Jinping agreed a three-month trade war ceasefire at Saturday's dinner meeting, giving investors optimism that it's just the first step in de-escalating a conflict that has weighed heavy on stocks in recent months.

But none of the indexes held their opening prices yesterday. By noon they'd given up almost 200 points from the open.  Bad sign or good sign? Time will tell. Maybe it was the big money guys and gals covering their short positions. Hard for us little guys to know.

I do know not to get to "jubilant" and go crazy here. While I did move some cash into a dividend paying stock ETF (SCHD), I did not go hog wild. Remember, pigs get fat, hogs get slaughter.

I looked to move into some blue chips that pay dividends, in case this is not an uptrend and if the market goes sideways again for a time, I'll pick up some dividends along the way. I'm waiting for more confirmation before I go with the growth hi-fliers. But that's just me.

I talked with a "Professional Financial Advisor" last week for over an hour who would have me in 70 percent stocks and 20 percent bonds and 10 percent "alternatives" (like gold) all the time. I'll repeat: ALL THE TIME. Bull markets, bear markets, side-winders, ALWAYS BE FULLY INVESTED. Just re-balance your portfolio and you'll do fine. While he's laughing all the way to the bank with the fees he's collected from me...

This is the way they operate. I've only met one (Ken Moraif) so far who'd actually get you out of the market and into cash or bonds in a bear market, rather than watch his client's portfolios go down an average of 37 percent (the average bear market). He can't time the markets better than anyone else, but a 10 percent loss is better than some bear markets that are 50 or 60 percent losses. He had all his clients in cash during the 2007-2009 bear market for 18 months.
Back to present reality, according to the futures outlook, markets look to open lower this morning. And note the last bar on the right. It's red. We might must wait for it to turn green.  While the weekly SPY chart looks a bit bitter, it's only been one day. 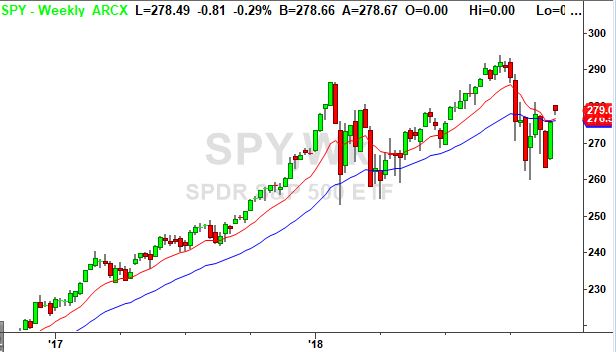