What the unemployment report shows -- the real impact

While most major news -- and financial -- outlets are reporting the basic unemployment rate of 14.7%, a more encompassing measure that includes those not looking for work as well as those holding part-time jobs for economic reasons also hit an all-time high of 22.8%. That reading may be a more accurate picture of the current jobs situation as millions of workers are being paid to stay home and thus not willing or able to look for new jobs. Its previous worst level was 17.2% in April 2010.

The jump in the “real” unemployment rate reflected a plunge in the labor participation rate to 60.7%, its lowest level since 1973.

In all, the rolls of the unemployed surged to 23.1 million, a jump of 15.9 million over March as governments across the country placed stringent restrictions on what businesses could be open. Multiple states are beginning to relax those rules, but about 60% of the economy remains under stay-at-home orders.

However, it’s not clear if the April numbers fully accounted for those classified as unemployed. In a note accompanying the tally released Friday, the Bureau of Labor Statistics said those people not at work because they were sick should have been counted as unemployed, though it “is apparent that not all such workers were so classified.” 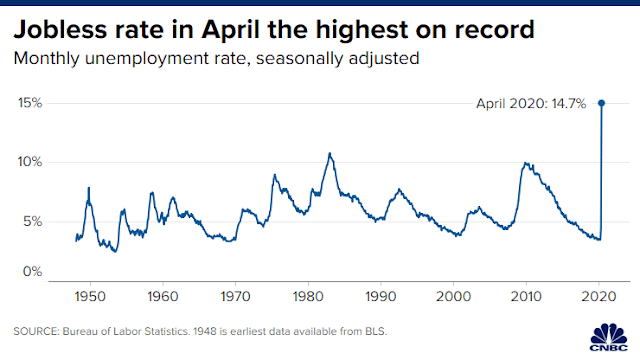 - May 09, 2020
Email ThisBlogThis!Share to TwitterShare to FacebookShare to Pinterest
Labels: Economics, Finance, Government