As shown by the chart below, the Biden administration is selling off US Strategic Petroleum Reserves (SPR) at the fastest pace on record. As of today, we are now at the lowest levels since 1985. 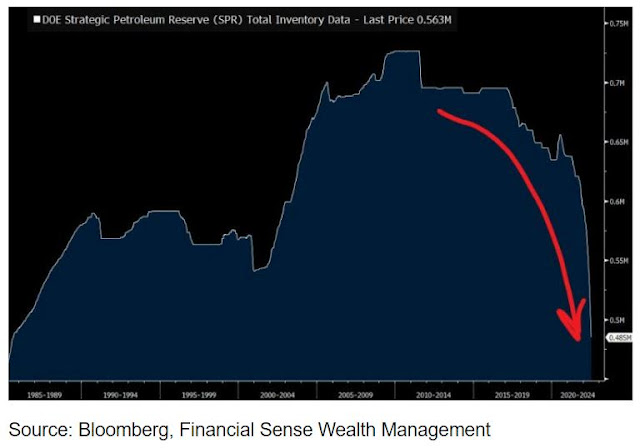 Here is where things get concerning: despite the biggest decline ever in the SPR, total US oil inventories (outside of the government’s emergency SPR) have barely budged off their lows. Let me repeat that. The biggest release of oil ever in the US has barely increased our total domestic inventories. 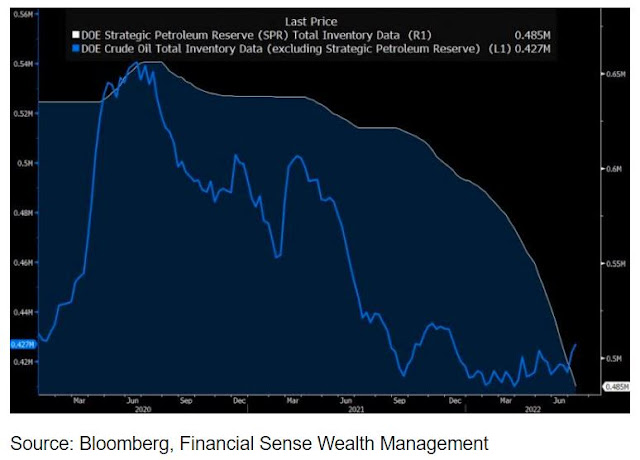 Low supplies can only mean higher prices (oil was at $97 today, July 15, down from its peak of $130 in March 2022) in the future, if demand remains the same -- or increases. you cannot have economic growth without energy to power that growth, and we will continue to see a humanitarian crisis until governments all over the world work to increase natural gas, nuclear energy, and oil production. If they don’t, shortages, cost-of-living spikes, and disruptions to our food and energy systems are likely to persist.
Biden is set to ask Saudi Arabia (today, July 15) to pump even more, in the latest effort to tame high energy prices that are weighing on the economy. According to the International Energy Agency, the Saudis and UAE are the only two producers with significant spare capacity, holding just under 3 million barrels a day of idle output between them (about 3% of global demand).
"The world has never witnessed such a major energy crisis in terms of its depth and its complexity," IEA Executive Director Fatih Birol warned at an energy forum in Sydney earlier this week. "We might not have seen the worst of it yet. This is affecting the entire world."
No sure I agree totally with that statement, but Biden's policies to date have only made the situation worse.
- July 15, 2022
Email ThisBlogThis!Share to TwitterShare to FacebookShare to Pinterest
Labels: Energy, Global Trends, Inflation