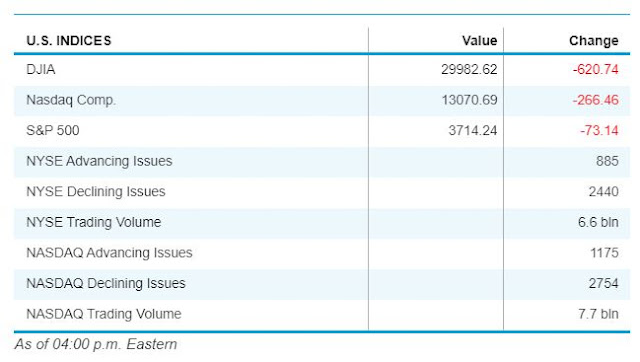 Markets remain choppy, with a decisive drop from record highs
The stock markets retreated decisively from record highs this week, with the elevated frothiness in the markets appearing to fall victim to the vulnerabilities of a shock to the system, which came in the form of a cohort of retail investors taking aim at highly shorted stocks. The Schwab Center for Financial Research (SCFR) discusses the disruption in the article, What Investors Should Know About Recent "Flash Mob" trading.

Meanwhile, the Federal Reserve reiterated its highly accommodative stance to combat the severely elevated unemployment levels as discussed by Schwab's Chief Investment Strategist Liz Ann Sonders in her latest article, Steady as We Go: Fed Keeps Rates Unchanged. Q4 earnings season reached a fever pitch and given that equities had been running hot coming into the season, the reaction on the Street was muted despite mostly stronger than expected results.

Of the 184 S&P 500 companies that have reported thus far, roughly 74% have topped revenue forecasts and approximately 83% have bested earnings projections, per data compiled by Bloomberg. Thus far, y/y sales growth has been modestly positive at a rate just shy of 1.0%, while earnings expansion is on track to be up nearly 5.0%.
Regional manufacturing activity surprisingly slows

The January Dallas Fed Manufacturing Index unexpectedly declined but remained in expansion territory (a reading above zero). The index decreased to 7.0 from 9.7 in December and compared to the Bloomberg consensus forecast of a rise to 12.0. New orders and production both expanded at much slower rates month-over-month (m/m), while growth in employment slowed but remained solidly north of zero.
CFNAI shows continued recovery at yearend
The Chicago Fed National Activity Index (CFNAI) increased 0.21 points in December to 0.52, indicating a pickup in growth at the end of 2020, despite a surge in COVID cases. The three-month average of the CFNAI edged up slightly to 0.61. While the headline index and its trend are lower than what they were in Q3, they indicate continued economic recovery in Q4, albeit at a slower pace. Additionally, the pace of growth is consistent with neutral inflationary pressures.
Three of the four broad categories of indicators made positive contributions to the CFNAI in December, led by production-related indicators. The CFNAI Diffusion Index, which is based on 85 individual indicators, slipped only 0.01 point to 0.54, positive for the seventh consecutive month, and near its highest level since December 1999. Such strong indicator breadth also suggests continued economic recovery.
Texas factory activity softens, but outlook up
The Texas Manufacturing General Business Activity Index fell 3.5 points in January to 7.0, a six-month low, indicating notable growth deceleration in the region. The assessment of individual company conditions was also the least favorable since last July. Production, new orders, shipments, and capacity utilization all posted slower growth rates. Employment growth also moderated, although hours worked pushed up higher. Raw material prices rose at the fastest rate in nearly a decade, while finished goods inflation eased, suggesting some downward pressure for profit margins.
Despite softer current conditions, manufacturers expressed more optimism about the near-term growth outlook.
Consumer Confidence improves slightly as Fed began first meeting of 2021

The Conference Board's Consumer Confidence Index increased to 89.3 in January from December's downwardly revised 87.1 level, and versus the Bloomberg consensus estimate calling for a slight improvement to 89.0. The positive read came as a decline for the Present Situation Index portion of the survey was more than offset by a solid gain in the Expectations Index of business conditions for the next six months. On employment, the labor differential—consumers’ appraisal of jobs being "plentiful" minus being "hard to get"—moved further into negative territory, posting a reading of -3.2 following the -1.9-level posted in December.

Finally, the Federal Open Market Committee (FOMC) began its two-day monetary policy meeting today, which will conclude with tomorrow's statement and the customary press conference from Fed Chairman Jerome Powell. Powell's comments are likely to be highly scrutinized given the backdrop of optimism of a second half economic recovery in 2021, rising inflation expectations, the recent steepening of the Treasury yield curve, Fedspeak as of late suggesting mixed feelings regarding tweaking asset purchases, and the disappointing start to the rollout of vaccines.
Home price index up 9 percent
The 20-city composite S&P CoreLogic Case-Shiller Home Price Index posted a 9.08% y/y gain in home prices in November, versus estimates of an 8.70% increase. Compared to the prior month, home prices were up 1.42% on a seasonally adjusted basis, above forecasts of a 1.00% gain. 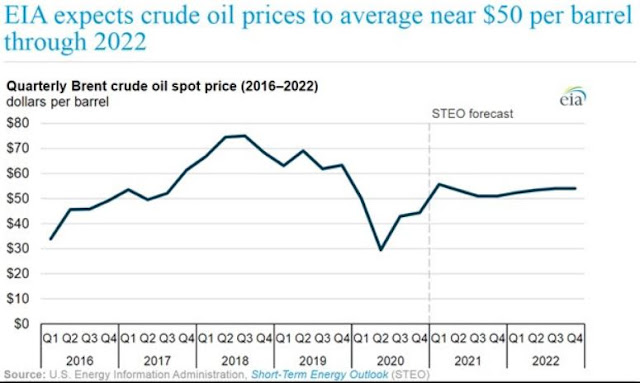 Oil industry alarmed at drilling restrictions
The Biden administration may suspend new leases on federal lands – the administration already issued a 60-day moratorium – sending the stock prices of oil drillers tumbling. New Mexico may have a lot to lose. However, the industry has already stockpiled permits that could take years to work through, so the practical impact may be limited.

December preliminary durable goods orders rose 0.2% month-over-month (m/m), versus the Bloomberg consensus estimate of a 1.0% rise and compared to November's upwardly revised 1.2% increase. Ex-transportation, orders grew 0.7% m/m, above forecasts of a 0.5% gain and compared to November's favorably adjusted 0.8% rise. Moreover, orders for non-defense capital goods excluding aircraft, considered a proxy for business spending, were up 0.6%, compared to projections of a 0.5% rise, while the prior month's figure was revised upward to a 1.0% increase.

The first look (of three) at Q4 Gross Domestic Product, the broadest measure of economic output, showed a quarter-over-quarter (q/q) annualized rate of expansion of 4.0%, versus the Bloomberg consensus estimate of a 4.2% gain after the unrevised 33.4% jump in Q3. Personal consumption rose by 2.5%, compared to forecasts of a 3.1% increase, and following the unadjusted 41.0% surge recorded in Q3.

The Conference Board's Index of Leading Economic Indicators (LEI) (chart) for December rose 0.3% month-over-month (m/m), in line with estimates and following November's upwardly revised 0.7% increase. The LEI was positive for the eighth-straight month after the plunges in March and April, due to positive net contributions from ISM new orders, building permits and stock prices, which more than offset weakness in jobless claims and average consumer expectations.
New home sales higher

New home sales (chart) increased 1.6% m/m in December to an annual rate of 842,000 units, versus forecasts calling for a rate of 870,000 units, and compared to November's downwardly revised 829,000 unit level. The median home price was up 8.0% y/y at $355,900. New home inventory rose to a 4.3-months supply at the current sales pace from the 4.2-months level in November. Sales in the Northeast and South declined m/m, while sales in the Midwest and West jumped. Sales in all regions, except the Northeast, were higher y/y. New home sales are based on contract signings, offering a timelier read on housing activity compared to the larger contributor of existing home sales, which are based on closings.
Personal income and spending better than expected, regional manufacturing jumps
Personal income (chart) rose 0.6% month-over-month (m/m) in December, versus the Bloomberg forecast of 0.1% gain, following November's downwardly revised 1.3% decline. Personal spending dipped 0.2%, versus estimates of a 0.4% decline and compared to the prior month's negatively adjusted 0.7% decrease. The December savings rate as a percentage of disposable income was 13.7%. The PCE Deflator gained 0.4% m/m, topping expectations of a 0.3% rise and compared to November's unadjusted flat reading. Compared to last year, the deflator was 1.3% higher, above estimates of a 1.2% rise and November's unadjusted 1.1% gain. Excluding food and energy, the PCE Core Index increased 0.3% m/m, north of expectations of a 0.1% increase and versus November's unrevised unchanged reading. The index was 1.5% higher y/y, versus estimates of a 1.3% increase and November's unadjusted 1.4% gain.

The January final University of Michigan Consumer Sentiment Index (chart) was revised lower to 79.0, versus expectations of a slight increase to 79.4 from the preliminary reading of 79.2. The downward revision came as the current conditions portion of the survey was adjusted lower, while the expectations component was revised higher by a smaller amount than anticipated. The overall index was also lower versus December's 80.7 level. The 1-year inflation forecast rose to 3.0% from December's 2.5% rate, and the 5-10 year inflation forecast increased to 2.7% from the prior month's 2.5% pace.

The Chicago PMI surprisingly jumped further into a level depicting expansion (a reading above 50). The index rose to 63.8—the highest since the Summer of 2018—in January from December's 59.5 level, and versus estimates calling for a decline to 58.5. Growth in new orders and production expanded at faster paces, but the contraction in employment intensified and prices paid accelerated.

Treasuries finished mixed with the rate on the 2-year note dipping 1 basis point (bp) to 0.11%, while the yields on the 10-year note and the 30-year bond rose 3 bps to 1.07% and 1.84%, respectively.
- January 29, 2021
Email ThisBlogThis!Share to TwitterShare to FacebookShare to Pinterest
Labels: Economics, Markets