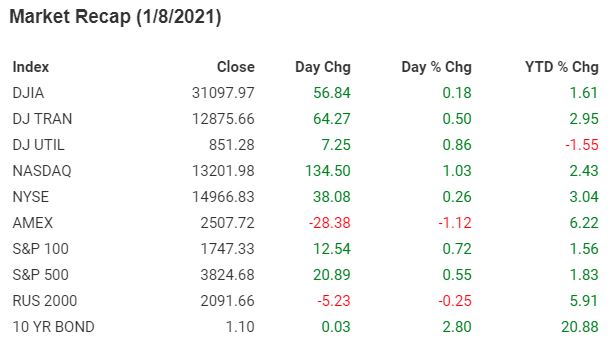 The markets appear to be pleased with the clarity on the political front as the outcome of the runoff elections in Georgia gave the Democrats a slim majority in Congress, which could prove pivotal in future legislation, notably implications for tax policy, regulation, further fiscal relief, and infrastructure spending. However, this week's violence at the U.S. Capitol remains a sore spot.
December manufacturing activity revised higher

The final December Markit U.S. Manufacturing PMI Index was unexpectedly revised higher to 57.1 from the preliminary level of 56.5, above the Bloomberg forecast of a slight downward adjustment to 56.3 and November's 56.7 level. A reading above 50 denotes expansion and this was the highest level since September 2014 amid further substantial increases in output and new orders. However, Markit noted that supply chain disruptions were the most severe on record and the industry saw the sharpest rise in cost burdens since April 2018. The release is independent and differs from the Institute for Supply Management's (ISM) report, as it has less historic value and Markit weights its index components differently, while it surveys a wider range of companies.

Construction spending rose 0.9% month-over-month (m/m) in November, versus projections of a 1.0% gain, and following October's upwardly-revised 1.6% increase. Residential spending rose 2.6% m/m but non-residential spending declined 0.6%.
December ISM Manufacturing Index shows strength
The December Institute for Supply Management (ISM) Manufacturing Index (chart) showed manufacturing growth (a reading above 50) unexpectedly accelerated. The index rose to 60.7 from November's unrevised 57.5 level, and versus the Bloomberg consensus estimate of decline to 56.8. This was the highest level since August 2018 as new orders and production growth accelerated, with both figures north of 60, and employment returned to expansion territory. Prices remained elevated, jumping 12.2 points to 77.6, a level not seen since the peak of the last manufacturing expansion cycle reached in the summer of 2018.

The ISM said, "Manufacturing performed well for the seventh straight month, with demand, consumption and inputs registering strong growth compared to November. Labor market difficulties at panelists' companies and their suppliers will continue to restrict the manufacturing economy expansion until the coronavirus (COVID-19) crisis ends."
Oil prices showing strength
Oil had a particularly strong day on Tuesday, with the price of West Texas Intermediate crude oil rising 4.9% to settle at $49.93, the highest since February. The rise came after the Organization of the Petroleum Exporting Countries (OPEC) reached an agreement with Russia and other large producers to keep production steady until March. Saudi Arabia will also cut supply.
ADP employment change surprisingly falls, mortgage apps up

The ADP Employment Change Report showed private sector payrolls declined by 123,000 jobs in December, versus the Bloomberg forecast calling for a 75,000 gain. November's rise of 307,000 jobs was revised to a 304,000 increase. Today's ADP data, which does not include government hiring and firing, comes ahead of Friday's broader December nonfarm payroll report, expected to show headline employment grew by 73,000 jobs and private sector jobs rose by 50,000 (economic calendar). The unemployment rate is forecasted to tick higher to 6.8% from 6.7% and average hourly earnings are projected to rise 0.2% month-over-month (m/m) and be up 4.5% year-over-year (y/y).

The final Markit U.S. Services PMI Index for December was revised lower to 54.8 from the preliminary estimate of 55.3, and versus forecasts of a modest downward adjustment to 55.2. The index was down from November's 58.4 figure but above the 52.8 reading a year ago. A reading above 50 denotes expansion. Markit's release is independent and differs from the Institute for Supply Management's (ISM) report, as it has less historic value and Markit weights its index components differently, while its survey respondents include those that vary more in size, including small and medium-sized companies.

Factory orders rose 1.0% m/m in November, versus estimates of a 0.7% gain, and compared to October's upwardly-revised 1.3% gain. This was the seventh-straight monthly rebound from the historic 13.5% tumble in April which followed the 11.0% fall in March.
Jobless claims decelerate, trade deficit widens

The trade balance showed that the November deficit widened more than anticipated, coming in at $68.1 billion, compared to forecasts of $67.3 billion, after October's unrevised deficit of $63.1 billion. Exports rose 1.2% month-over-month (m/m), and imports gained 2.9%.
Energy bulls are back
Brent topped $55 per barrel at the end of the week, as the pledge from Saudi Arabia to cut deeper has built a solid rally. Other forces are at play as well, including monetary stimulus, the prospects of deeper fiscal stimulus in the U.S., and vaccine optimism. “The past 10 weeks of trading have seen only one weekly decline, which was comparatively small,” said Carsten Fritsch, an analyst at Commerzbank AG. “This is testimony to the strength of the oil market in the last 2 1/2 months.”

Cold winter rallies coal and gas. Thermal coal prices in China are shooting up, and JKM prices for LNG are skyrocketing. Spot prices for liquefied natural gas (LNG) delivery in Asia jumped to a six-year high. A cold winter across the northern hemisphere is contributing to price gains. Javier Blas of Bloomberg notes that at least one LNG spot cargo was sold for $33-$36/MMBtu, which would be a historically high price.

Georgia Senate races open up more aggressive Biden plans.
The twin wins in Georgia by two Democrats flipped control of the Senate. That opens up a lot more possibilities for the Biden administration on a range of energy and climate initiatives. S&P Global Platts gives a rundown. 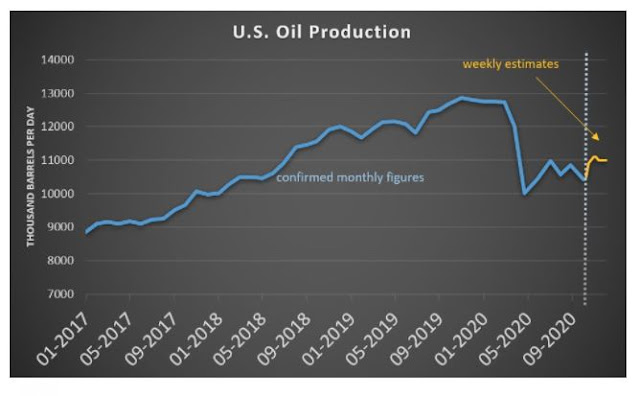