- May 19, 2021
By Rida Morwa
Seeking Alpha
In the last two days, we have seen extreme panic among income investors rushing out of the door and dumping their shares of AT&T (T) after hearing about the announcement of a dividend cut following the AT&T/Discovery transaction. The shares of the company are down by 8% in the past two trading sessions. This panic has created a great buying opportunity, and we explain why.

AT&T decided that they would be acquiring Discovery (DISCA) in a "Reverse Morris Trust transaction." Essentially, T will be spinning off WarnerMedia and all of its assets into a new company that will be owned 71% by current shareholders of T and 29% by current DISC shareholders. 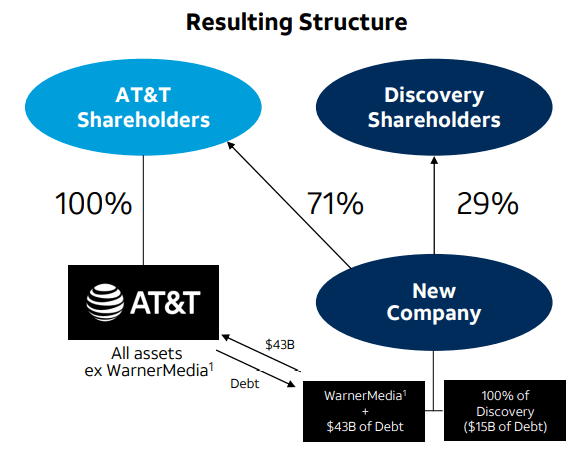 The market's initial reaction to the merger was broadly positive until panic hit the market about the divided reduction, without looking at the big picture.

The dividend will be reduced. From the conference call, CEO John Stankey said:

The transaction is expected to be tax-free to AT&T and to our shareholders. AT&T will receive $43 billion in a combination of cash, debt securities and WarnerMedia's retention of certain debt. Upon close, which we expect in mid-2022, AT&T shareholders will receive stock, representing 71% of the new company with Discovery shareholders receiving the remaining 29%. We plan to reset our dividends at that time.

T expects the new dividend will be 40%-43% of "free cash flow" which they project to be over $20 billion. That works out to be around $1.12/share. It's also safe to assume that the "new company" will not be paying dividends anytime soon. So from an income standpoint, this will be a reduction and that single fact is the main reason T is selling off.

Yet the dividend alone is not the sole determiner of value. T is not cutting the dividend because their business is failing or that they don't have enough cash flow. Instead, T is vastly improving their capital allocation and providing a beautiful deal to their shareholders that they can "cash in" on in just one year, or hold on for the very long term and see significant growth.

Let's take a look at the value being created by this transaction.
NewCo

For T shareholders, they're gaining 71% ownership in a "new company" or NewCo. How much is that worth? Based on pro-forma 2020 numbers, NewCo produced $12 billion in adjusted EBITDA in 2020.

Note that the NewCo will have dramatically higher revenues than streaming peer Netflix (NFLX). In terms of scale, NewCo will be the behemoth of the streaming sector. When it comes to content, NewCo will have something for everyone. Warner has been a top 2 movie studio in 11 of the past 12 years, with tons of scripted TV shows along with premium sports rights. Meanwhile, DISC contributes the most popular "unscripted" content available today.
With more than 200,000 hours in content, this dwarfs their competition on sheer volume. NFLX, for example, has roughly 30,000 hours of content. The real kicker is that NewCo will own the content. NFLX has been facing the reality that as content producers like WarnerMedia start having their own streaming services, they will allow their distribution agreements to expire. This is what has been driving NFLX to invest increasing amounts of capital into developing its own content. Well, Warner has been producing content for more than 100 years, they have more than a little head start.

For content, NewCo will absolutely be competitive and likely blow away the competition. They have the advantage of sheer volume and diversity. 30 years ago, what will be available from NewCo would have been known as every channel on your cable subscription and would cost north of $100/month.
Valuation

One way to value the company is enterprise value/EBITDA (EV/EBITDA). At $14 billion in projected EBITDA for 2023, NewCo would be worth $182 billion at 13 times. Netflix is currently trading at 16 times EV/EBITDA.

And that's just to start. The new service will see significant growth and possibly outgrow Netflix in terms of number of subscribers.
Legacy T

Meanwhile, "Legacy T" (the company excluding WarnerMedia) is still a huge company, one that will be much better focused on their wireless and broadband. Post-split, T will still be producing more than $20 billion in free cash flow. That is $2.80/share.

Before T's acquisition of Time Warner, it routinely traded above 10x FCF outside of recessions. So how much is T worth post spin off? Well on the low-end, let's assume the value remains as low as it is today at 7 times. And on the high-end, let's assume 10 times - still a very conservative amount. That implies a valuation of $19.60-$28.00.

Sum Of The Parts

So for T shareholders:
That means that even with incredibly bearish valuations, T is worth $29.10 today at the minimum. Assuming still very conservative valuations, it is worth $40.33.

With the market panic about the prospects of a dividend cut over the past two days, investors have a great opportunity to buy the stock at very attractive valuations. Today, T is trading back close to $30/share.

Additionally, investors will have at least one more year of "big income" as T intends on paying out the full $2.08 dividend currently yielding 7%. The dividend will not be changed until after the spin-off.

A buyer today investing $30 will gain:

It's also entirely possible that the NewCo will be trading at such a high valuation that the AT&T investor who sells his share in the NewCo (when it starts trading or a few months later) and re-invests back the funds in AT&T may not lose a single penny of income.

We are not the only ones excited about this deal. According to Bank of America,

Conclusion
The market can be an emotional place. Many investors will read one data point and panic. For this merger, many investors were either fixated upon the dividend and/or read some analysis that only showed one side of the coin, creating undue panic. Unfortunately, one-sided analysis can be hurtful for investors, and often results in unnecessary losses.

At High Dividend Opportunities, we're long AT&T and we took a decision from the start not to sell. I personally added to my position yesterday morning at open when the market was in full panic. I will be happy to buy more if the price drops further. Based on our conservative analysis, there are 20% to 40% returns over the next year by investing in AT&T today, holding on, or adding to your position.
Other articles:
Buy AT&T, Get WarnerMedia For Free
Don't Sell AT&T
AT&T: What To Do About The 40% To 50% Dividend Cut
AT&T Did What? Why I Am Short-Term Bullish
Dividends Investing Stocks