Policies Do Have Consequences

As reported in the Wall Street Journal, the unemployment rate in April nationwide was 6.1%, but this obscures giant variations in the states.

With some exceptions, those run by Democrats such as California (8.3%) and New York (8.2%) continued to suffer significantly higher unemployment than those led by Republicans such as South Dakota (2.8%) and Montana (3.7%).

It’s rare to see differences that are so stark based on party control in states. But the current partisan differences reflect different policy choices over the length and severity of pandemic lockdowns and now government benefits such as jobless insurance. Nine of the 10 states with the lowest unemployment rates are led by Republicans. The exception is Wisconsin whose Supreme Court last May invalidated Democratic Gov. Tony Evers’s lockdown...

Most states in the Midwest, South and Mountain West aren’t far off their pre-pandemic employment peaks. One obstacle to a faster recovery may be the $300 federal unemployment bonus, which many GOP governors are rejecting. Meantime, states with Democratic governments continue to reward workers for sitting on the couch. The longer that workers stay unemployed, the harder it will be to get them to return to work.

One of the worst parts of Biden's waste-filled stimulus plan is that it gave a big bailout for states, based on a formula that actually rewarded them for having bad numbers. 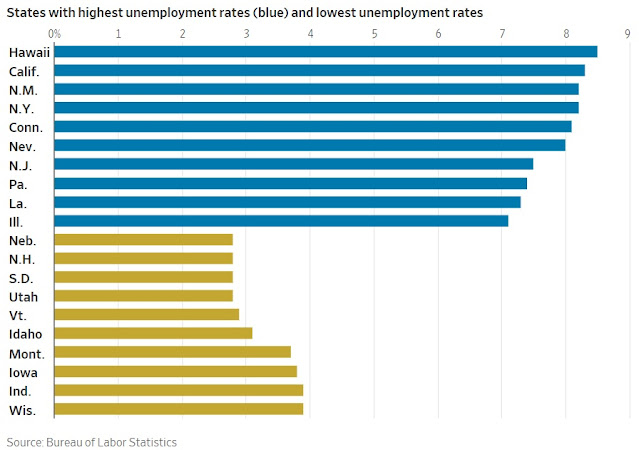