Biden Urges OPEC to Pump More, But Not American Producers

Update Aug 16, 2021: OPEC+ sees no need to meet U.S. call for more supply (Reuters).
While the administration begs overseas adversaries to ramp up oil production with jobs and development to the benefit of foreign citizens, Americans remain handicapped by Democrats’ zealous animosity towards fossil fuel extraction on domestic land.
Just after assuming office, Biden announced last week a range of executive orders aimed at addressing climate change and starting the process of phasing out fossil fuels, a promise he made on the campaign trail.
As part of the orders, all new oil and gas leasing on public lands was indefinitely paused to allow time for a “comprehensive review and reconsideration of oil and gas permitting and leasing practices.”

The review will also consider adjusting royalty fees for oil and gas, which are about $2 an acre and haven’t been updated for decades. The order does not apply to tribal lands.
Underneath the tundra surface of Alaska’s North Slope sits an estimated 4.3 t0 11.8 billion barrels of untouched recoverable oil located within the flat wetland boundary of the Arctic National Wildlife Refuge (ANWR). Then-President Donald Trump opened ANWR’s 1.6 million acres of the 19.6 million-acre refuge for drilling in the 2017 Tax Cuts and Jobs Act, with leases approved since then now in jeopardy under the new administration.
Biden has been yanking permits and demanding new environmental assessments in an effort to cancel projects altogether. Last week, the Interior Department tossed out the analysis completed under the National Environmental Policy Act (NEPA), long held as the gold standard of assessing environmental impacts, and ordered a new supplemental review for leases in the Arctic refuge two months after they were suspended.
The Biden administration called the earlier review insufficient in a routine attack on projects it merely aims to cancel with the new assessment ordered to “identify the significant issues, including any legal deficiencies in the Final EIS [Environmental Impact Statement].”

Meanwhile, current operations in neighboring Prudhoe Bay show oil and gas extraction can be done cleaner in the United States than in any other country with no harm to wildlife.

Oil and gas producers have been drilling the flat surface of Alaska’s Arctic coast 60 miles west of proposed sites in ANWR since the late 1970s. Objections to the project at the time were the same ones wielded by environmental leftists today that such operations would put the caribou in danger.
Contrary to the doomsday prophesies, the caribou have thrived, rising to peak population of 70,000 in 2010, according to the U.S. Fish and Wildlife Service. They have since fallen back down to 22,000 in 2016, consistent with their herd’s natural cycle, with still a higher population than the fewer than 20,000 estimated in 1997.
The new administration staking out its opposition to drilling on environmental concerns while it welcomes extraction abroad with lower standards at first appears a classic case of NIMBYism. A look in ANWR’s backyard, though, will find the Iñupiat people as the sole tribe within the boundaries of the proposed area for drilling. They have demanded the right to develop their own land. Instead, Biden has kept operations in ANWR frozen, along with the development dreams of local villagers and Americans as a whole.
The chart below shows American oil production over the last four years, which reached a peak of nearly 13 million barrels a day in 2019, but now sits around 11.3 million barrels a day. 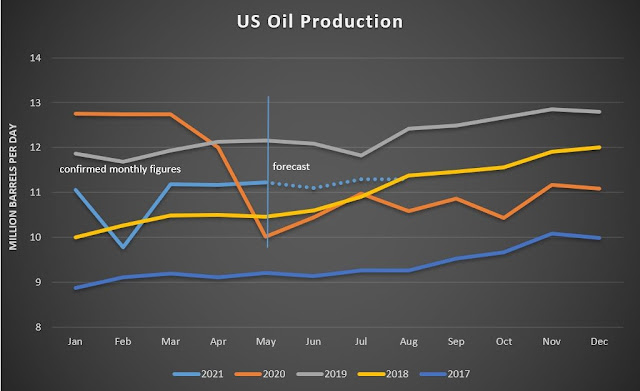