Biden's Claim Over Gas Prices is Not Reality

Biden's chart is wrong. The second chart shows price of gasoline futures, April contracts. The third chart shows price of oil, WTI, April contracts. There is always a time-lag between what is paid at the well-head or by the refinery.  Individual retailers set gas prices based on what they expect their future fuel deliveries to cost. But they have no clue right now due to all of the global uncertainty. Oil prices have plunged this past week in part because the United Arab Emirates said it would urge OPEC to pump more. But the cartel might not.

Another thing that the graph tweeted by Bloomberg's Blas shows is that the national average for gas did not jump as high as the cost of oil. In fact, it shows that oil and gas companies would have been generating less profit as oil prices spiked.
Another inconvenient truth for Biden's attempt to make boogeymen out of oil and gas companies? "The vast majority of the nation’s 150,000 gas retailers are mom-and-pop operations" and "fewer than 5% are owned by refiners." For those individual retailers, "profit margins are only about 10 to 15 cents a gallon even when prices shoot up," meaning "small businesses aren’t padding their profits. They’re trying to hedge against big losses if oil prices spike."
Does Biden or his administration care that the narrative they are currently pushing is based on activists' claims rather than reality? Probably not. As he's shown repeatedly during his first 14 or so months in office, he'll divide Americans and direct their anger at straw men in order to save his own hide. Those tactics, as polling consistently shows, are not playing to Biden's advantage. 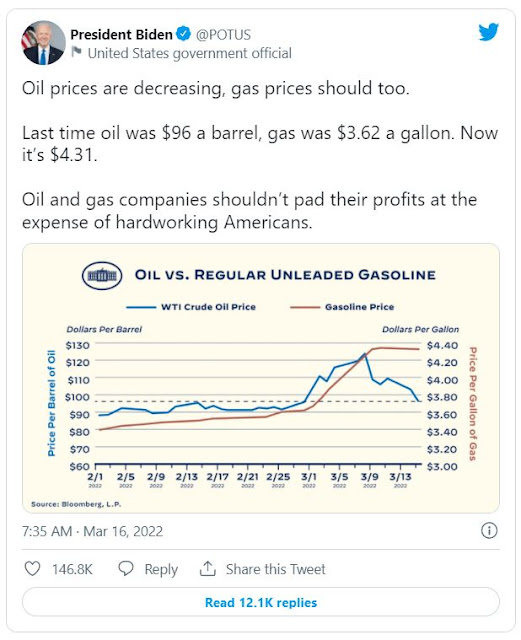