With the major stock indexes hitting new record highs last week, most analysts agree that stocks are overvalued. Stock prices are, after all, driven in large part by corporate profits, and after-tax corporate profits have been mostly sideways since 2015 as you can see below. This raises the question of whether the current record stock prices are justified. 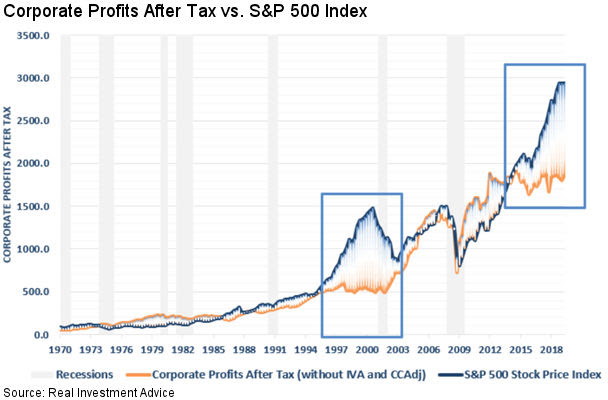 As you can see above, the last time this metric got so out or whack was in 1999-2000, and we all know how that ended. The S&P 500 lost 49% in the 2000-2002 bear market. Most bullish analysts who are aware of the current disparity between prices and after-tax profits argue that this time is different because interest rates are near historical lows.


Others point to significant changes in corporate accounting rules and unprecedented share buybacks in recent years to justify the current disparity. I would caution, however, that both the accounting changes and the share buybacks are artificial and finite in nature.

While no one knows how long this disparity can continue, I would argue that most investors are not aware of this huge gap between after-tax profits and the latest record high prices.

USA Today: Corporate Profit Outlook Is Weak and Getting Weaker

From Gary Halbert's Between the Lines: Democrat's "Wealth Tax" -- A Giant Invasion of Privacy
- November 13, 2019
Email ThisBlogThis!Share to TwitterShare to FacebookShare to Pinterest
Labels: Investing, Markets