The Uncertainty of the 2020 Elections and Possible Market Turmoil

Presidential campaigns are filled with policy proposals. Go to any candidate’s website and you can see a raft of proposals on all sorts of topics. Some get lots of attention—think “Medicare for All” or the “Green New Deal.” What all of the big ideas in this campaign have in common is that they will cost money. Lots of money.

That's on top the current annual deficit which runs about $1 Trillion per year.

To pay for their proposals, most of the Democratic candidates have plans to increase taxes. It’s how they go about it that differs.

Most want to repeal the Trump tax cuts, including Elizabeth Warren. But she said the middle class won't pay a dime more in taxes, so I'm not sure how that works.

All of them, in some form or another want to tax the "rich" to pay their "fair share." I can't find a definition for these two terms anywhere. It's what you think it means, I guess. But you can see who pays taxes from this article "A closer look at who does (and doesn't) pay U.S. income tax." 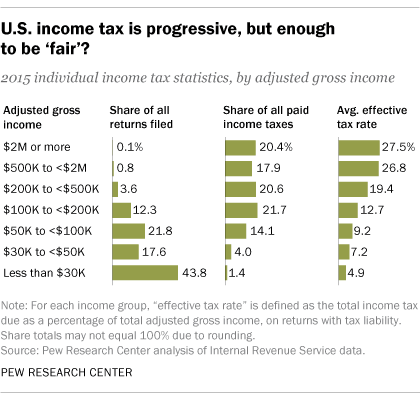 Some call for higher payroll taxes. Others call for a VAT, or value added tax, which is pretty much the same as a sales tax. Both would be middle class tax hikes.

Another category is what is known as “mark-to-market” taxes on wealthier taxpayers, which includes a tax on unrealized gains. Senator Ron Wyden, a Democrat from Oregon, unveiled a proposal earlier this year that would levy a tax on unrealized gains, as if the assets had been sold during the year. It’s a complicated proposal that is aimed at millionaires and billionaires, and a lot of details still need to be worked out. But the taxing of unrealized gains, even if it affected a relatively small percentage of the population, would be a fundamental change in how investments have been treated for decades.

Finally, there are the wealth tax proposals, essentially a surcharge on wealth. The two most prominent advocates are Senator Warren and Senator Sanders, both of whom have announced plans for an increase in taxes on the ultra-wealthy.

But in general, they want to tax the rich, as well as raising taxes on corporations. But if you follow every wealthy nation that has embraced high welfare spending, including Sweden and Denmark, everyone pays more in taxes. In Sweden for example, a middle class family earning $75,000 pays about 60 percent of their income in taxes. While college and health care are free, the government rations the quantity of services. Not everyone goes to college and there a long waiting lists for health care.

Taking every dollar earned by people with incomes above $200,000 would not be enough to pay for the proposals that have been floated. A flat tax rate of 100 percent on those with incomes of $1 million or more would not even raise enough to eliminate the current federal deficit.

My guidance for investors is to not get overly caught up in any of these proposals. It is three months before the first votes in the primaries and caucuses will even be cast. There is not unanimity among Democrats on any of these proposals. All will be heavily debated, and if they do make it into the Democratic platform, they’re likely to look far different than they do today. All are very much dependent, of course, on the election outcome. And none will be in play until 2021 at the earliest.

For all these reasons, investors should not overreact. There will be plenty of time to study the details and form a strategy that is right for you, if and when these proposals move from the idea stage to actually becoming legislative proposals that are being considered in Congress.
- November 05, 2019
Email ThisBlogThis!Share to TwitterShare to FacebookShare to Pinterest
Labels: Economics, Politics, Taxes