I don't always do a week in review, but I thought it would be helpful to take a look at what's going on. (It's easy for individual investors to create their own week in review. Use the Economic Calendar, sign up for market reviews with your broker, and visit web sites such as CNBC, Yahoo Finance, Forbes, Seeking Alpha, Market Watch, etc.)

The U.S. equity markets finished the last trading session of the week modestly higher, but failed to post gains for the week, as the omnipresent uncertainty swirling around a U.S.-China "phase one" trade deal that has hampered conviction all week tempered some upbeat news on the manufacturing front and some mixed retail sector earnings reports. Markit's manufacturing and services sector reports came in stronger than expected, and the University of Michigan's Consumer Sentiment Index was unexpectedly revised higher.

The risks of marginally slower payroll growth in November as well as an incremental rise in the unemployment rate are the indications from initial unemployment claims which, in data that track the sample week of the monthly employment report, came in at a higher-than-expected 227,000 in the November 16 week. Comparisons with the sample week of the October employment report show a 9,000 increase in claims with the 4-week average, at 221,000 in the latest week, up nearly 6,000. The 221,000 4-week average is the highest since June.

The index of leading economic indicators continues to signal slowing growth going to into year end and next year. The index fell 0.1 percent in October and follows a revised 0.2 percent decline in September and another 0.2 percent decline in August. Weakness in manufacturing components has been the persistent theme in the slump with easing in labor strength also a negative factor for the index.

Favorable mortgage rates together with high levels of employment are giving housing, a sector that had been flat, a strong lift going into year end. Existing home sales rose 1.9 percent in October to a 5.460 million annual rate, lifting the year-on-year gain to 4.6 percent. Recent reports have been the best since early 2018.

On Nov 2, I discussed high-yield bonds sending the stock market a warning sign. This continues to indicate a possible correction in the market. Note that HYG just formed a “lower low” on the chart. And that’s after a number of lower highs since the peak in late October. This signals the trend is shifting into more bearish action. We may not be there yet, but it's something to watch closely.

It looks to me that if HYG closes below $86.20 anytime over the next few sessions, then we’ll have a decisive breakdown from that pattern and junk bonds will be headed lower.

And, if junk bonds head lower, then the stock market should follow close behind. 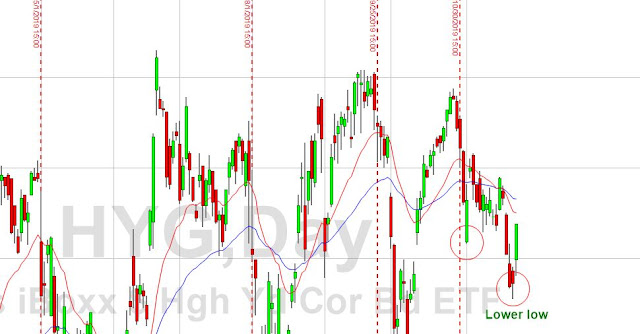