Show Me the Money! But There's a Catch to Checks for Kids 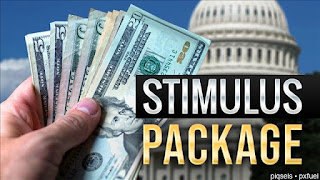 The latest round of stimulus checks began arriving yesterday, but you have to be a parent to get one. Your kids also have to be under 18, with $300 per month for a child below age 6 and $250 for those aged between 6 and 17. The expanded child tax credit is aimed at cutting the child poverty rate and was part of the coronavirus stimulus package passed in March.
How much will it cost? Uncle Sam is shelling out $105B for the program, which will be sent out monthly for half of this year's subsidy, with the rest to come as a tax refund in 2022. "It's the most transformative policy coming out of Washington since the days of FDR," said Senator Cory Booker (D-NJ). "America is dramatically behind its industrial peers in investing in our children. Even families that are not poor are struggling, as the cost of raising children goes higher and higher."

Commenting on the new child tax credit, Treasury Secretary Janet Yellen noted that the funds would provide an additional spending boost for the economy. She also called for the monthly installments to be permanent, saying the program is "something that's very important to continue." "It certainly will add to spending, but most importantly, it provides support for families to take care of the needs of children."

Wait a minute...there's a catch

The tax credit, originally established in 1997, previously provided a $2,000 credit per child under age 17 for the majority of US households. The economic stimulus bill passed this March granted a one-year expansion during the 2021 tax year, allowing for up to $3,000 per child under 18 ($3,600 for children under six) for many households. Notably, the law allowed for monthly payments through December, instead of a one-time refund upon filing taxes.
There's at least one catch—the deposits are actually prepayments based on estimated 2021 taxes, meaning families may face smaller returns or unexpected tax bills next April
The advance payments of the enhanced child tax credit are set to start in July, but a big question on many parents’ minds is whether they will end up owing on their taxes next year if they immediately spend the money.

For some parents, the answer is probably yes, they will end up owing money next tax season. Others will likely be fine. But all eligible parents should review their finances before spending the payments, financial experts say.

“This is not like the stimulus checks,” said a certified financial planner. If you get overpaid in child tax credits or your financial situation changes this year so that you have a higher tax bill on your 2021 taxes, the IRS may demand you repay the credit come tax time.
Eligible families will receive half of their credit in the form of monthly payments of up to $250 per school-age child and up to $300 per child under 6 from July through December 2021. The other half will be paid out when they file their 2021 taxes. The credit is income-based and starts to phase out for individuals earning more than $75,000 a year or $150,000 for those married filing jointly.
For example, if you have two children and would have received a $6,000 child tax credit next year (2021 tax year), and you receive $500 per month this year from July through December for a total of $3,000, you'll only be able to claim a $3,000 child credit on your tax return. That will increase your taxes by $3,000.
There are further details, and options to opt-out, explained at CNBC.
You can also get details from the Internal Revenue Service.
- July 16, 2021
Email ThisBlogThis!Share to TwitterShare to FacebookShare to Pinterest
Labels: Finance, Government, Taxes