Markets were probably a little ahead of themselves anyway. While markets have pulled back from nearly all-time highs (and in some cases, all-time highs), there is no way to tell what will happen (despite some "experts" already speculating about a market "crash".

As you see from this daily chart of the NASDAQ (as of 2:52 PM CDT on July 8), it has a ways to go before getting to correction territory. 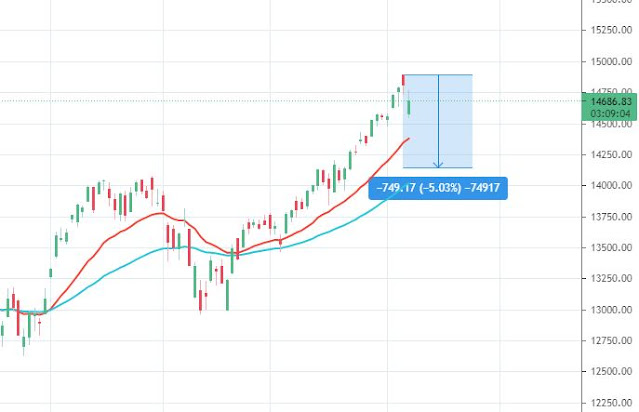 In other news, a prolonged drop in U.S. Treasury yields is catching bond and fixed income traders by surprise, as well as other investors in the broader financial markets. The 10-year U.S. Treasury yield dropped below 1.3% on Wednesday, and fell another 7 bps overnight to 1.25%, despite lingering concerns about rising inflation and a gradual removal of Fed stimulus. Treasury yields play an important role in the economy, affecting borrowing costs on everything from mortgages to corporate bonds.
While the move has mystified many traders, some are ascribing the reverse to changing narratives and new developments." The market is sort of taking a deep breath," said Subadra Rajappa, head of U.S. rates strategy at Société Générale. "Are those optimistic forecasts [for economic growth and inflation] actually achievable?"

"All that seems to be implying that perhaps not only was the inflation transitory, but maybe some of the growth has been transitory," added Kathy Jones, Schwab's chief fixed income strategist.

"The muscle memory of markets is that governments will lock down again [due to the Delta variant] if they see cases rise, which means slower growth and that we are caught in a loop," explained Charles Diebel, head of fixed income at Mediolanum International Funds.

"A reduction in the Treasury General Account, which the U.S. government uses to run most of its day-to-day business, is being wound down, shrinking the supply of bonds," proclaimed John Luke Tyner, fixed-income analyst at Aptus Capital Advisors.

"A big portion of what we are seeing is a capitulation of the higher rates thesis," J.P. Morgan wrote in a research note. "Some short covering has occurred, but the breadth of bearish duration positions remains on par with 2017-2018."

Most analysts had expected 10-year Treasury yields to hit around 2% by this point in the COVID economic recovery, or at least by the end of 2021. In the first quarter alone, the yield soared from 0.9% to nearly 1.75% as the reflation trade took hold of the markets, but it looks like the move lower is now staying firmly in the opposite direction. Longer-term yields are also a closely watched economic barometer, with the rates tending to fall on a weakening growth outlook.
- July 08, 2021
Email ThisBlogThis!Share to TwitterShare to FacebookShare to Pinterest
Labels: Investing, Markets, Stocks