Showing posts from March, 2019
Show all

Are you fooling yourself when it comes to money?

- March 27, 2019
Good article released today from Schwab. I'll summarize first, then provide the link to the entire article. 1. You don't need a budget. Yes you do. I've been doing a monthly budget since 1985.  2. An emergency won't happen to me. Hey, stuff happens. Have an emergency fund.  3. If I'm short on cash, I can always use credit. This will get you in trouble.  4. Retirement is a long way off. It comes quicker than you'd expect. Time is your greatest asset, so start early. 5. I can live without insurance. Not really. But don't go crazy either. For example, whole life insurance policies are expensive. Use term insurance and invest the difference.  6. I've got a sixth sense about investing. If you do, pass it to me please.  7. I should take Social Security as soon as I can. Well, this depends, but the longer you wait, the higher the benefit. 8. Estate planning is only for the wealthy. Sure, if you want what you own to end up in probate. Not
Post a Comment
Read more 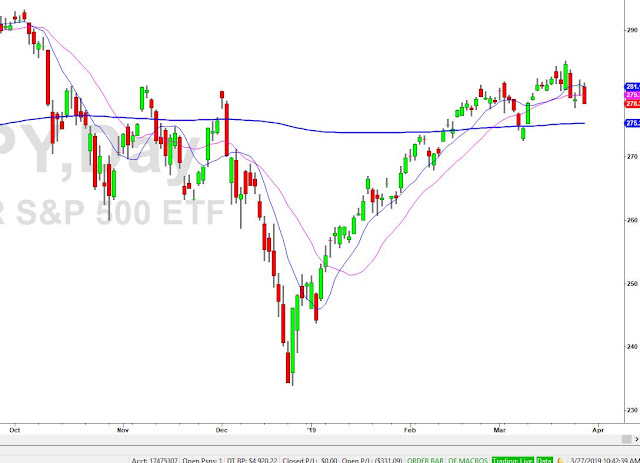 The market struggles today, with all major indices down. At 10:45 am CDT, the DJIA is down about 220. The S&P 500 has lost nearly 30 points.  This is really no surprise to me. The last uptick in the market was on lower than average volume, which means (at least to me) there wasn't a lot of enthusiasm from the large institutional guys and gals.  There were other indications of some weakening in the economy, such as housing starts down 9 percent in January. KB Home and Lennar, large new home builders (I live in a new KB Home), reported lower than expected earnings and revenues. While mortgage rates are slightly lower, they are still higher than historic lows.  Reports by Schwab this morning included: " European equities are trading mostly to the downside in afternoon action, with concerns of a decline in economic growth seeming to trouble investors. Also, weak economic data out of China is weighing on the markets, while global growth uncertainty remains a source
Post a Comment
Read more 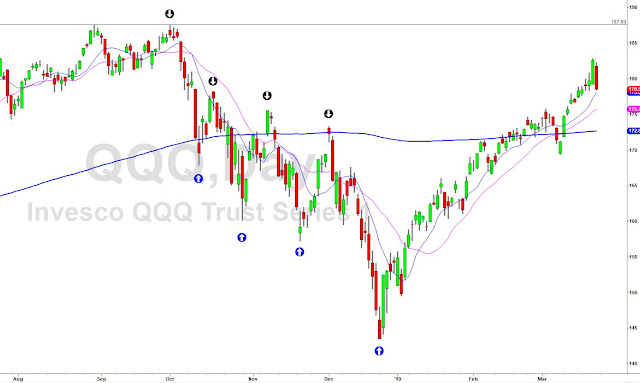 Friday's market losses reportedly occurred because of weakness in Europe, among other worries of investors. Actually, it may have just been a little profit taking. With millions of investors buying and selling, there is probably no one motivation. But markets are overvalued. See the Buffet Indicator , which puts markets at significantly overvalued.  Markets may open lower this morning, based on futures markets. Not time to panic, also not time for celebration. If a new downtrend is starting (IBD indicates an uptrend under pressure), it might be time to add to long equity positions. I'll wait and see.  According to Seeking Alpha's Wall Street Breakfast report this morning, "It's another dark day for  equities across the board as heavy losses in the U.S. on Friday spread to Asia overnight, with the Nikkei closing down 3% and Shanghai 2% lower. Dow and S&P futures are now off by 0.3% and the Nasdaq by 0.6% as the U.S. treasury yield curve turned positive after
Post a Comment
Read more 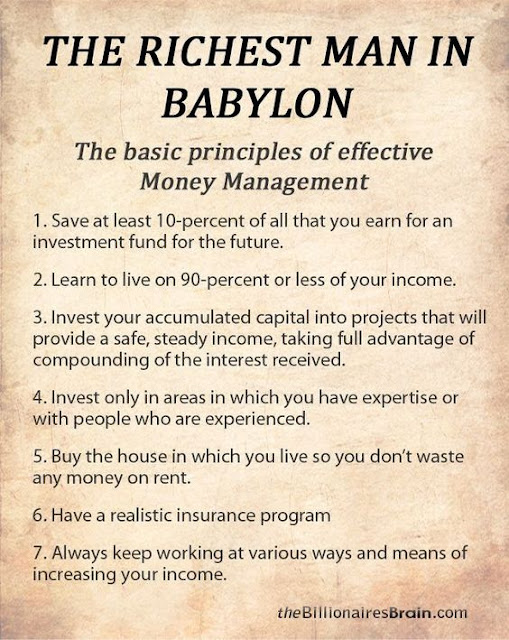 The ideas are simple. The execution hard. Success in personal finance is 20 percent knowledge and 80 percent behavior. Learn to discipline yourself.  The rest is easy.
Post a Comment
Read more

Where is the market heading? 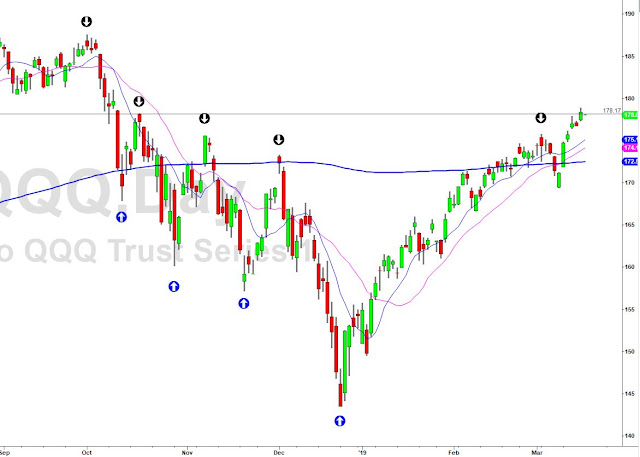 We've been tracking the NASDAQ, which has moved a bit higher, breaking previous high points. How much upside is still left remains a secret of our crystal ball. But I'd hold current long positions. Not sure I'd add. I have about 50 percent of my portfolio in cash/money markets, with a small position short the NASDAQ and Russell.
Post a Comment
Read more 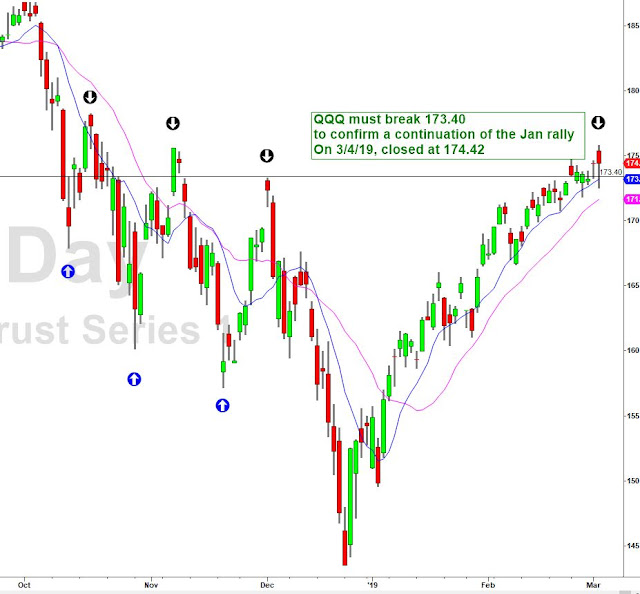 Sell the News. Stocks popped 0.5% at the 9:30 a.m. opening bell yesterday (March 4), but it was downhill from there. By 1 p.m., the Dow Jones Industrial Average was off 1.6%. The Dow rebounded to close down 0.8%, but that was still the largest decline since Feb. 7.  We've been following the QQQ which tracks the NASDAQ, and still really don't have any confirmation one way or another. Investor's Business Daily uses a Daily Pulse indicator for market direction. It's currently at "confirmed uptrend," but the paper also tracks distribution days, which are down days on heavier-than-average volume. There are four on the S&P and three on the NASDAQ. Four or more indicates caution. " The Nasdaq and S&P 500 held above their 50-day moving averages. The Nasdaq 100-tracking Invesco QQQ Trust (QQQ) actually rose a fraction. Those are reasons to remain invested in stocks, but also to be guarded in the coming days," according to the March 4th issue.
Post a Comment
Read more

IF AOC says global warming will end the world in 12 years, I think this will beat her to it 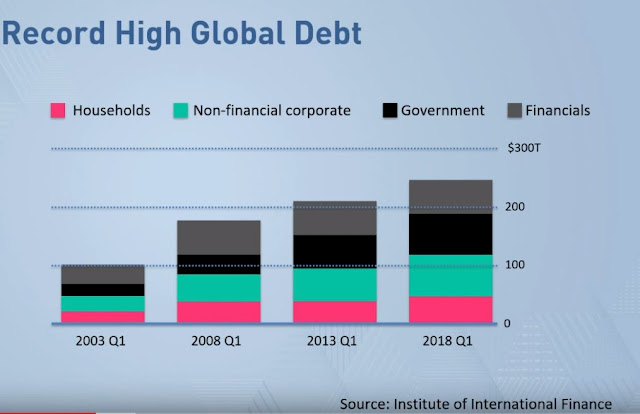 A friend of mine who happens to live in California, during a recent election, when asked if she was concerned with budget deficits (both state and federal) her response was "Deficits, speficits. They take care of themselves." Not only did she show a complete ignorance of economic principles, I'll bet she doesn't run her household budget that way. Total global debt now stands at nearly $250 trillion. $250,000,000,000,000.  That's a lot of money. It will eventually bankrupt the world, and when it does, it will make the great depression of the 1930s look like prosperous times.  The U.S. debt is $22 trillion, but this number does not include unfunded liabilities, such as future social security and medicare costs. These liabilities are estimated at over $200 trillion -- for the U.S. only.  One of my favorite economists, Dan Mitchell, has spelled out six principles to help get us out of this situation. Here are his bullet points. Read the entire article he
Post a Comment
Read more

Some weird -- or may not -- headlines of the day 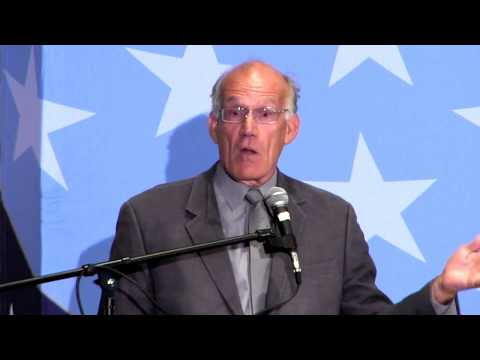 "Talented Democrats Are All Running for President. It's a Problem". It's a Bloomberg opinion piece , but it still made me laugh at the choice of the word "talented."  Then it goes to discuss two democrat candidates from Texas, who I guess are going to run for President (which Democrat isn't), because they can't win local Texas elections.  These, and all the current Democratic hopefuls, are not talented. They are just popular with left-wing liberals.  Here's some other scary stuff to make you glad it's TGIF. A recession? Financial advisers say it's right around the corner — or not  (This from a publication that is written for Certified Financial Advisors).  The sub head reads:  A case can be made that the economy is headed for an imminent slowdown or still has some juice left. If this is the best analysis CFA can come up with, caveat emptor. New York City Experienced Worst Decline in Restaurant Jobs since 9/11 After $15
Post a Comment
Read more 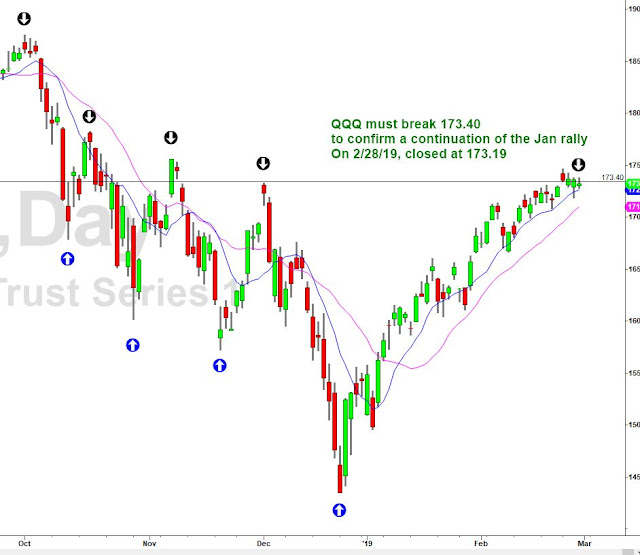 The NASDAQ's ETF, the QQQ, still meanders around its latest support level. Futures this morning point to a higher opening in most markets, but that is only an indication, not a prediction of the actual market opening.   From Bloomberg, Five Things You Need to Know Today (in their opinion anyway).
Post a Comment
Read more
More posts