The Push Toward Socialization

Just when you thought it couldn't get any worse. Democrats are now pushing two very bad ideas: 1) Do away with the "gig" economy, as California has done with its draconian restrictions on independent contractors; and 2) nationalize the oil and gas industry.

The attack on American's right to work

From National Review (subscriber only):
The Department of Labor wants to effectively outlaw gig work. The Golden State has been there, done that, and the results aren’t pretty.

The Biden administration has effectively declared war on gig work, with its Department of Labor proposing a new federal regulation inspired by California’s controversial AB 5 law that would limit people’s ability to be classified as independent contractors and work as they choose.
This proposal, if successful, would cruelly upset millions of lives. At least 57 million Americans are currently involved in gig work, a number expected to grow to more than 86 million within the next five years.
More on GIG ECONOMY

The End of Freelancing?

AB 5, which essentially bans independent contract and freelance work, was one of the most hated bills to emerge from the Sacramento sausage-making process in recent memory.

Using the aforementioned “ABC test” developed by the California Supreme Court, the law establishes who can legally work on a contractual basis and who must be a hired employee. The classification bar set by the test is so high that few freelancers can clear it. Consequently, almost every independent contractor has to become a hired employee, form their own business, or lose their job.

This is no accident: The aim of AB 5 was to force employers to put their gig workers on the payroll, along with all the costs — unaffordable for many businesses and organizations — that are associated with doing so.

In his public statements about the newly proposed regulation, Secretary of Labor Marty Walsh has resorted to the same duplicity that California lawmakers used first in passing, and then in defending, the indefensible AB5. In a recent press release, for example, Walsh said the rule is needed to safeguard “our nation’s most vulnerable workers,” ensuring that they are not deprived of “their federal labor protections.”
As Bloomberg Law reports, “The US Labor Department’s new proposed worker classification test has parallels to California’s ‘ABC test’ [a provision of AB 5], which presumes workers are employees instead of independent contractors under the law.”

How to make the energy market collapse

From a newsletter by Michael Shellenberger
The energy crisis is worsening. The U.S. has fewer than 30 days of diesel and other distillate fuels, the lowest level since 1945. Supplies are so low that there will be shortages and price spikes within six months unless the U.S. enters recession, experts warn. In response, the Biden administration is releasing more oil from the Strategic Petroleum Reserve. But the reserves are of crude oil, not refined oil products such as diesel. And the releases are stifling investment in future oil production. “People are depleting their emergency stocks,” warned Saudi Arabia’s energy minister earlier this week. “Losing emergency stocks may become painful in the months to come.”

In response, influential Democrats, including a leading U.S. Senate candidate, a former Department of Energy official, and an influential energy expert, are urging the U.S. government to socialize America’s oil and gas firms.
At a Houston conference last week, Jason Bordoff, Dean of Columbia University’s Climate School, called for the “nationalization” of oil and gas companies. “Government must take an active role in owning assets that will become stranded,” he said, “and plan to strand those assets.” By “strand” Bordoff meant “make financially worthless.” Bordoff made the point at least twice during the confrerence. Bordoff’s call shocked many in the audience. “Jason is smart, well-informed, and well-connected to the Biden Administration,” said someone who was at the conference, “so these comments are scary.”

The calls come on the heels of two other Democrat-led efforts to expand U.S. government control over oil and gas production. One is a piece of legislation called “NOPEC,” which passed the Senate Judiciary Committee in May. The bill would change U.S. antitrust law to revoke a policy of sovereign immunity, which protects OPEC+ members from lawsuits. If NOPEC became law, the U.S. attorney general could sue Saudi Arabia and other OPEC members in court. The result could be a disruption of global supplies of oil and other commodities if nations retaliated against the U.S.

The other is an effort led by Treasury Secretary Janet Yellen to cap the price of Russian oil sold on global markets, which I and many other experts have warned since June is unworkable, because China and India have said they would circumvent it, and could backfire, resulting in far higher oil prices. Last week, analysts with Rapidan Energy told the same Houston conference that the December 5 implementation of the Russian price cap could reduce global supplies of oil by 1.5 million barrels per day. Such an amount would create an oil price shock.

Earlier this month, Bordoff told the World Economic Forum, which has called for a “Great Reset” to quickly move from fossil fuels to renewables, that climate change required a “massive transition” that is “going to be messy, it’s going to be disruptive.” Said Bordoff, “I think part of the broader macro environment that's happening now is one of more disruptive change because of climate impacts, but also more disruptive change because of geopolitics coming out of the pandemic, coming out of this conflict, completely rethinking what the World Economic Forum is all about.”
- October 28, 2022 No comments:
Email ThisBlogThis!Share to TwitterShare to FacebookShare to Pinterest
Labels: Democratic Party, Economy, Energy

We live in a society full of insufferable narcissists

Reposted from the Washington Examiner

I have written extensively over the past year about the victims of gender ideology: the children and young adults struggling with the normal pangs of maturation who get swept away by a movement that promises them identity and community, and the parents who feel helpless as they desperately try to drag them back to reality.

But let’s be clear about something: Not everyone in this movement is a victim. All you have to do is watch some of the videos highlighted by accounts like Libs of TikTok, and you’ll realize that many of these gender ideologues are unabashed activists who would love nothing more than to shove their crazed distortion of reality down your throat. They know that what they are preaching is nonsensical, and they relish the idea of forcing you to conform to it.

Here’s a perfect example of this kind of narcissism, which runs rampant in leftist circles:

This is a young man who is so obsessed with himself and his new identity that he felt the need to create a video complaining about customers who fail to refer to him by his preferred “they/them” pronouns. Never mind his Adam’s apple and visible male proportions. He expects you to disavow what you’ve seen with your own eyes and submit to his version of reality, in which he’s not a male but a gender-fluid unicorn who has defied the heteronormative patriarchy to reach a new level of diversity and inclusion. As Jeb Bush would say, please clap.

There’s a comedic element to all of this in that it’s so obviously absurd that one wonders whether even the young man is able to take himself seriously. But the thing is, I’m past the point of finding any of this funny. I don’t laugh anymore when I read stories about corporate offices adding ridiculous pronoun options like “fae/faer” and “bun/bunself” to their email signatures, or about how college campuses are overrun with students who expect you to start a conversation by asking, “What are your pronouns?”

And that’s because I recognize videos like this one as the threat that it is. Gender ideologues like this young man don’t want respect or even basic courtesy. They want submission, and they’re determined to get it.

Activists have worked with Big Tech companies to censor and de-platform users who “misgender” people like Deputy Secretary of Health and Human Services Rachel Levine. Multiple teachers and professors who have refused to use students’ preferred pronouns have been punished and, in some cases, even fired. Two middle school students in Wisconsin were even subjected to a Title IX complaint for failing to use a peer’s preferred pronouns correctly. And in the United Kingdom, British police warned citizens that they could find themselves at the center of a criminal investigation for misgendering someone.

There is no such thing as the tolerant Left. How could there be, when the people who make up the movement are such insufferable narcissists?
- October 21, 2022 No comments:
Email ThisBlogThis!Share to TwitterShare to FacebookShare to Pinterest
Labels: Culture

Why economic forecasts are unreliable. Or maybe it's the CBO. The Fed and most economist have not done very well, historically. This chart shows projections for inflation compared to actual inflation. 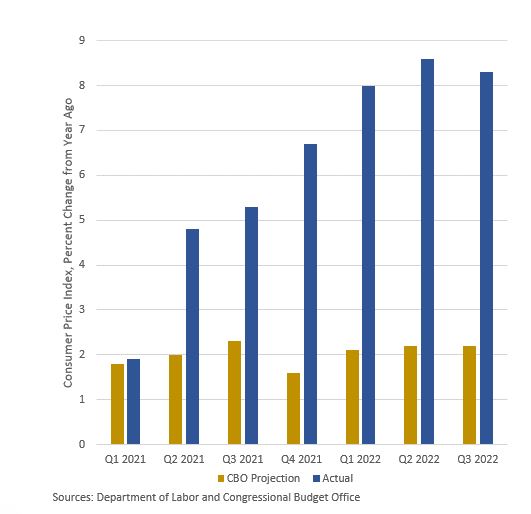