The Consumer Price Index (CPI) increased 0.6% in March, the most since August 2012, and above the consensus of 0.5%. It was led by a 5.0% jump in energy prices, the most since September 2017, while food prices were up a small 0.1%. Core CPI, which excludes energy and food, increased 0.3%, also above the consensus of 0.2%.
Most core CPI components increased. Shelter was up 0.3%, led by a 3.8% rebound in lodging away from home. It was the biggest rise in this component since October 2005, reflecting the gradual reopening of the economy and an increase in travel and hotel stay. Car insurance prices rose 3.3%, its third consecutive gain. Used car and truck prices rose 0.5%, but new vehicle prices were flat. There were notable price gains in household furnishings and operations, recreation, and personal care. On the flip side, there were price declines in apparel and education.
On a year-over-year basis, CPI increased 2.6%, the most since August 2018, while core CPI rose a more moderate 1.6%. Both reflect the early stages of the pandemic that depressed prices last spring. Due to the base effect in calculating annual price growth, headline CPI inflation will approach 3.5% in the next few months, while core inflation will exceed 2.0%. Although this effect should be transitory, expect reopening of the economy, a strong recovery, and ongoing shortages of raw materials and products to lead to moderately higher CPI inflation of about 2.2% at the end of this year, compared to 1.4% last year.
Economists say that inflation numbers are expected to have a kind of sticker-shock effect in the coming months because of base effects. The year-over-year numbers will appear to be large because the comparable 2020 months were at the heart of the economic shutdown.

There are also fundamental concerns, though, with supplier demand outstripping supply, as seen in the ISM numbers, heightening concerns about bottlenecks, that, and pent-up demand for services, could find its way into retail prices.

The March PPI raised some eyebrows last week. Wholesale prices jumped 1%, double expectations, while the Core PPI rose 0.7%, well above the consensus of 0.2%. The headline annual wholesale inflation rate hit 4.2%. ”This is beyond the base effects,” Allianz adviser Mohamed El-Erian said after the report. “This is something between demand pull and cost push and its something to pay attention to.” ”The ever rising cost of product procurement” is showing up in government numbers, Peter Boockvar of Bleakley Advisory Group says. “The y/o/y jump ... is more than base effect as the m/o/m numbers are up sharply too.” That said, the stock and bond markets settled down quickly after an initial reaction to the PPI report. 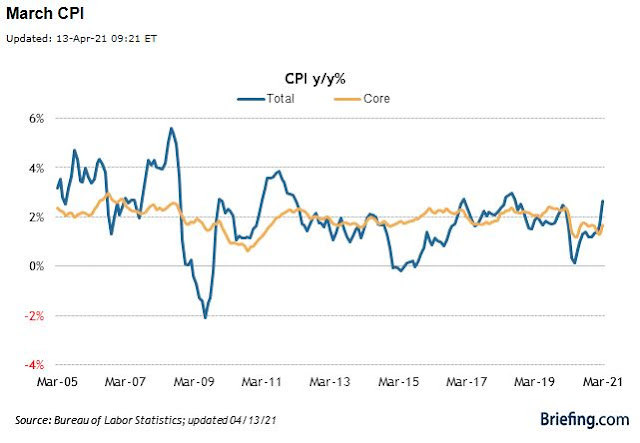