Is This the Beginning of Increased Inflation? 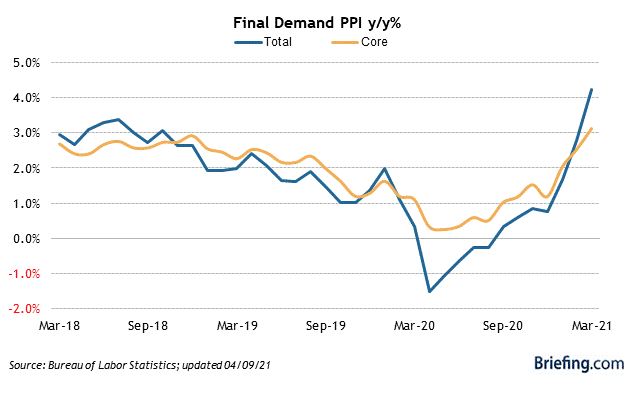 The Producer Price Index (PPI) for final demand jumped 1.0% in March, the second most since December 2009, and double the consensus of 0.5%. Nearly 60% of the increase was attributed to a 1.7% surge in the goods PPI, the most on record, led by energy.

The services PPI advanced 0.7%, its third consecutive gain, led by machinery and vehicle wholesale margins. PPI for final demand ex-energy and food was up 0.7%, also the second most on record, and exceeding the consensus of 0.2%.

On a year-to-year basis, the PPI for final demand increased 4.2%, the fastest pace since September 2011, while core PPI was up 3.1%, a record jump. Both goods and services producer prices surged from a year ago. The broad-based increase reflects rising demand amid ongoing supply chain challenges that are creating shortages and bottlenecks. Indeed, intermediate prices soared across the production flow, suggesting a significant buildup in pipeline pressures. Some of these pressures will be transitory and should subside as supply chains improve and trade flows normalize. But it will take more than a couple of months for this to resolve.

The base effect in calculating PPI year-to-year changes in March was negligible, as the lockdowns last year did not depress prices until April and May. As a result, PPI inflation will exceed 5.5% year-to-year in April.

The PPI for final demand personal consumption, which correlates strongly with the CPI, surged 3.8% year-to-year, also the most since September 2011, and implies a jump in consumer price inflation, when the report is released next week.

Ken Moraif of Retirement Planners of America discusses inflation and the Fed in this video: