From Kelly Evans @ CNBC
The retail sales report came out this morning.

How's a 10% surge in spending sound? Because that's what just happened in the month of March (okay, 9.8%, to be precise). And don't be fooled into thinking that number only sounds big because it's compared with last March, the nadir of the pandemic. No, no. U.S. retail sales surged that much in March from February. In one single month. If they kept up that pace, that's a nearly 120% annualized increase, or in other words, a more than doubling of total U.S. spending on retail items. 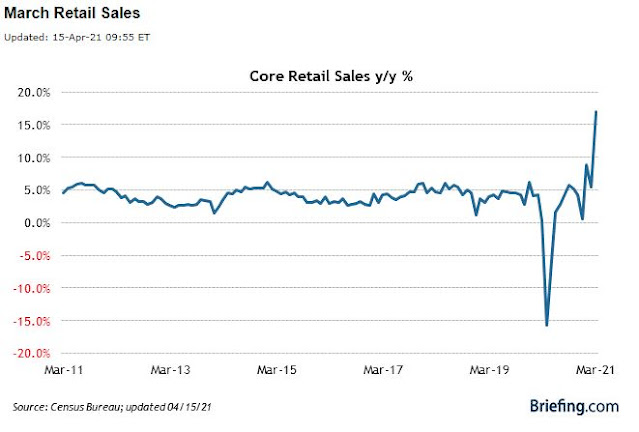 Now, of course that pace won't be kept up. But it helps to illustrate just how strong March sales were. Even if you average it out with the decline we saw in February and add in the nearly 8% surge in January, we're now talking about a 35% annualized spending pace in the first quarter. I mean, that is really, really, extraordinary, unusual, jaw-dropping stuff. If you're curious, March sales were up 28% from the prior (pandemic) year.

Where is this all coming from? Stimulus payments "were a definite positive, but the main force driving sales up was an outsized increase in earned wages and salaries in March," wrote economist Brian Bethune. Recall the U.S. added nearly a million jobs last month. Bethune thinks we could now hit 7% GDP growth this year.

The reopening is absolutely gaining traction, and force. President Biden may want to spend another $2.3 trillion on the economy, but it's unclear the economy needs it. For the first time in recent memory, risks could be tilted on the side of doing too much this year, instead of too little. The monthly budget deficit for March just hit $660 billion dollars. And that's before the President's $1.9 trillion Covid package hits, since it was only just signed last month. Not to mention another $2.3 trillion on top of that.

The strong sales report comes as initial jobless claims fell again and after record-breaking reports on service-sector and manufacturing activity already this month (I wrote about that last week). The bond market may have already priced this in; the 10-year yield is actually slipping today below 1.6%. Perhaps traders think there's no way another mega-spending bill gets passed. And if the economy stays this strong, perhaps they'll be right.