This is in no way meant to be an in-depth analysis, but just a cursory examination of the data would conclude that the leftist narrative of systemic racism in America is wrong. After the chart, I include a story on reactions by the Detroit Police Chief over comments by a congresswoman.

Conclusion: Blacks have slightly more incidents of killing by police, but numbers don't show "systemic" racism in police departments. No one with any intelligence could conclude this from the actual data.

If blacks have a higher ratio of crimes committed, the easy -- yet wrong -- conclusion is racism. Yet, socioeconomic factors have more influence on potential crime rates than anything else. 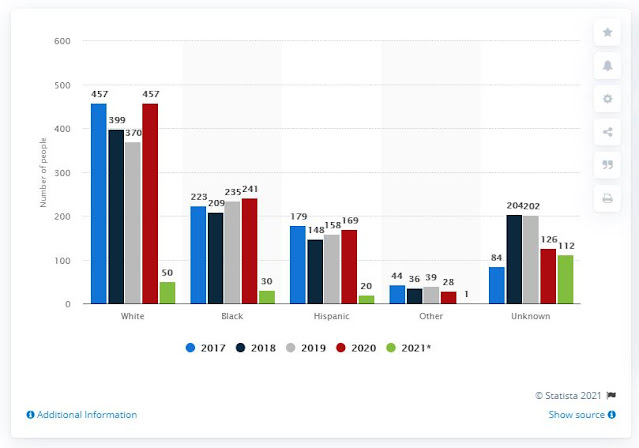 Detroit police chief fires back at Tlaib’s ‘shameful’ rhetoric
Detroit Police Chief James Craig said Wednesday that officers under his command remain “fully engaged” in their duties because they know he and city officials support them even as police in other major cities are being disciplined and fired for doing their jobs.

In an interview with Newsmax TV’s Greg Kelly, James also blasted Democratic Rep. Rashida Tlaib, whose district includes Detroit, over a recent tweet in which she claimed that police and prisons can’t be “reformed” and that all should be defunded.

“It wasn’t an accident,” she tweeted following the death of 20-year-old Daunte Wright, who was shot and killed by former officer Kim Potter after she appeared to mistake her service weapon for her Taser as he resisted arrest. “Policing in our country is inherently & intentionally racist.”
“I was really shocked that she said this,” Kelly said, adding that Tlaib has made outrageous statements in the past before asking James to respond.“Ridiculous, reckless, kneejerk,” James began. “Not surprising, but I will tell you, it’s also self-serving. Because really, when you think about it, Detroit residents, they don’t want to dismantle the Detroit Police Department. They don’t agree with defunding. And they certainly don’t agree with closing down prisons so that everybody can just be, you know, like ‘Summer of Love,’ like in Portland and Seattle.”
Read entire article here.
- April 22, 2021
Email ThisBlogThis!Share to TwitterShare to FacebookShare to Pinterest
Labels: Culture, Left