60% of millennials earning over $100,000 say they're living paycheck to paycheck

I always suspected that living paycheck to paycheck did not involve your income, but was influenced by bad behavior and outright ignorance of how to handle your personal finances. And throw in some vanity, and you've got a recipe for eating cat food in retirement. Or maybe you'd prefer dog food.

Been there, done that, so I'll include myself in this category, until I shook off the insanity and put things right. I'm on a ribeye diet, nicely retired, thank you. Here are some facts, as reported by Business Insider.

In a survey this June, 60% of millennials earning over $100,000 said they live paycheck to paycheck.
Some of these millennials - known as HENRYs - prefer a comfortable, expensive lifestyle.
In today's economy, $100,000 is considered middle class in the US.

Sixty percent of millennials raking in over $100,000 a year said they're living paycheck to paycheck, found a survey this June by PYMNTS and LendingClub, which analyzed economic data and census-balanced surveys of over 28,000 Americans.

It found that about 54% of Americans live paycheck to paycheck. And nearly 40% of high earners - those making more than $100,000 annually - said they live that way.

That means high-earning millennials aren't the only ones feeling stretched thin, but they feel that way more than their six-figure-making peers. Living on constrained budgets may therefore have less to do with income and more to do with expenses, the report said.

That's partly because of lifestyle choices. Many of these millennials are likely HENRYs - short for high earner, not rich yet. The acronym was invented in 2003, but it has come to characterize a certain group of 30-something six-figure earners who struggle to balance their spending and savings habits.

HENRYs typically fall victim to lifestyle creep, when one increases one's standard of living to match a rise in discretionary income. They prefer a comfortable and often expensive lifestyle that leaves them living paycheck to paycheck.
They don't have to, but changing your behavior can be harder than it looks. But it can be done.
So pay off your debt, live by a budget, have goals and a plan, save for retirement. 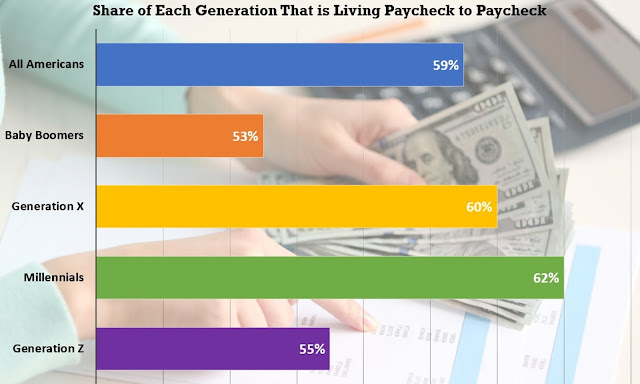