We are experiencing inflation for the first time in a long time: at least four decades as a matter of fact. We are also experiencing scarcity in some goods and services. I am 69 years old—the only time in my life that I recall experiencing this level of scarcity was with gasoline in the 1970s because of the oil embargo.
From what I recall of the 70s, people were plenty grumpy about having to do even/odd days at gas stations and sit in hour-long lines. And the interest rate on my mortgage was north of 10 percent. 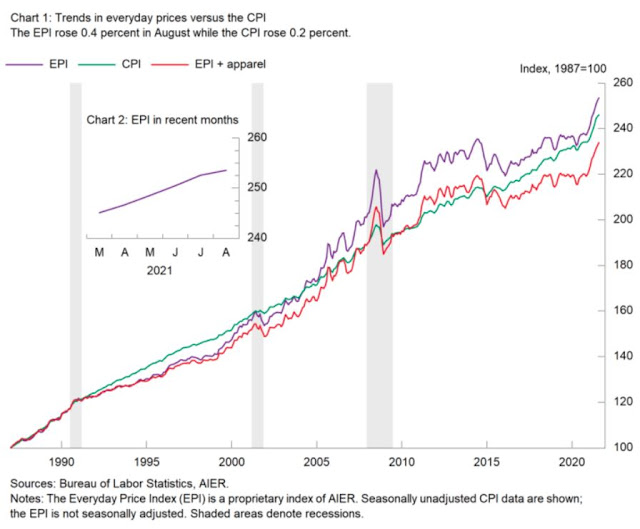 Americans are generally great people. But we are not good at rationing scarce resources. It is every man for himself. If I think we are going to run out of cat food, I am not going to leave some in the store for my neighbor. My cats are more important.

It’s simply supply and demand. Supply is shrinking for a variety of reasons, but a big reason is the shrinking labor supply—there simply aren’t enough people to transport it and stock it and put it on the shelves. People are staying home because the government has financially incentivized them to stay home. Even after the extra financial incentives were removed, people decided they liked staying home better.
The generally rising prices that add up to broad inflation don’t come out of nowhere. Supply and demand factors cause them. As the COVID era drags on, adapting to the various changes it generated is increasingly difficult, and therefore increasingly expensive.

These changes aren’t crazy or complicated. Compared to 2019, Americans are eating more at home, buying more goods via e-commerce instead of in stores, fixing up their backyards instead of going on vacations, etc. Yet they add up to giant changes in the industrial supply chains in a relatively short time. This is causing problems.
A free-market economy is generally antifragile—if there is a fire in a meatpacking plant, other meatpacking plants will surge to meet demand. But if there are chronic shortages of raw materials and labor throughout the economy, things break down. And if things really do break down—where the scenario I described comes to pass, and grocery stores are ransacked—the government will respond by rationing scarce resources, which will make it worse.
The economy can adapt to all this, but not instantly. And it’s starting to look like the process will take longer than we thought a few months ago. That means inflation may be less “transitory” than we thought, too.

We are starting to see price increases on some goods—like meat—that have risen to the point where they are starting to equilibrate supply and demand. I saw $22 for a pound of prime ribeye on my trip to the grocery store. I like steak as much as the next guy, but those types of prices make me think twice -- in fact, I haven't bought a ribeye in more than six months. If this keeps up, the political pressure to do something about high food prices will increase, and the government will act in such a way that makes the shortages even worse.
I was taught in the 1970s -- our last real inflationary period -- that is was OK to spend as much as you could, even on credit, because  you'd be paying back in cheaper dollars. This was fine if inflation is running at 10 percent or higher; but fails miserably most of the time when inflation is below what you can reasonably earn on your investments, such as 1980 through 2020. So around 2000, I switched to a debt-free standard, and my personal financial health soared.
If Biden and Company get their way, the increased spending (of money we don't have) will increase or prolong inflationary tendencies. If you couple this with higher taxes, economic growth with slow. This will probably cause investors -- especially if the Fed has to raise interest rates -- to begin selling for safer assets. A bear market could result. It's a real possibility.
So have a plan to protect yourself. Mine is simple: If one or more of the major indexes falls below it's 50 day moving average, and the 20-day moving average also falls below the 50-day, it's time to start selling. Remember the adage: the trend is your friend. Another indicator of a changing trend is to look at the highs and lows of each leg. Higher highs and higher lows is an uptrend. Lower highs and lower lows is the opposite.
Until then, I'm going to keep buying, but never on credit or margin.
- September 19, 2021
Email ThisBlogThis!Share to TwitterShare to FacebookShare to Pinterest
Labels: Inflation, Investing, Markets