From Schwab
Market Insight
The Federal Open Market Committee (FOMC) concluded its two-day monetary policy meeting today, opting to leave its stance and interest rates unchanged, as was widely anticipated, and there was also no change to its asset purchases. However, the Committee sharply raised its expectations for inflation this year and pulled forward the timeframe of when it could begin to raise interest rates, surprising the markets.

In its statement, the Committee said, "Progress on vaccinations has reduced the spread of COVID-19 in the United States. Amid this progress and strong policy support, indicators of economic activity and employment have strengthened." On inflation, it noted that prices have risen, but it still deems it as "transitory," while it also continued to reiterate its intentions to aim for an average of two percent over time, and that longer‑term inflation expectations remain well anchored at two percent. However, in the updated economic projections provided with its statement, it upped its projection for PCE inflation to 3.4%, a full percentage point from its March estimate, and the core PCE, which excludes food and energy, to 3.0% from the previous meeting's 2.2% forecast. As well, the Committee increased its estimate for real GDP to 7.0%, a one-half percentage point above March's reading. As such, the Fed's "dots plot" showed that members saw a liftoff of rates could come as soon as 2023, whereas it saw no increases until at least 2024 at its last meeting.

In his scheduled press conference following the statement, Chairman Jerome Powell said that the effects of bottlenecks on inflation have been larger than anticipated, and that inflation could turn out to be higher and more persistent than previously thought. As such, Powell said that the Committee is prepared to adjust policy if pricing pressures move too high, but any needed change to its policy would remain accommodative. Get more in-depth analysis on the Fed's decision from Schwab's Liz Ann Sonders in here commentary later this afternoon on our Market Insights page. 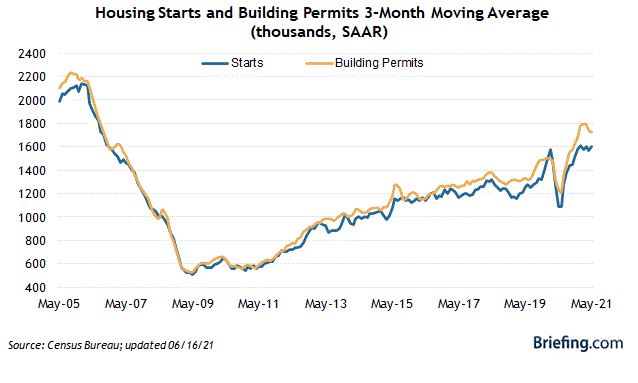 The MBA Mortgage Application Index rose by 4.2% last week, following the prior week's 3.1% decrease. The increase came as the Refinance Index gained 5.5% and the Purchase Index was 1.6% higher. The average 30-year mortgage rate declined 4 basis points (bps) to 3.11%.
- June 16, 2021
Email ThisBlogThis!Share to TwitterShare to FacebookShare to Pinterest
Labels: Economics, Markets