In a stunning reversal of optimism amid growing fears of the Delta variant hitting the economy, the Reuters/University of Michigan Consumer Sentiment Index plunged 11.0 points in August to 70.2, far below the consensus of 81.3. It was the lowest reading since December 2011, blowing past the pandemic low of 71.8 reached in April of last year. Excluding the pandemic, this was the biggest monthly drop since October 2008.

In fact, there have been only four other instances since 1978 of declines of at least this magnitude: December 1980, August 1990, September 2005, and October 2008. Except for the 2005 case, all were associated with recession. This doesn’t mean that the economy is headed in the same direction today, but it does raise the risk of consumers disengaging from the economy for fear of the virus which would reduce the momentum of the broader expansion. On a y/y basis, Sentiment is off 5.3%, also historically consistent with a moderation in growth.

Inflation expectations remained elevated. The one-year inflation outlook edged down modestly to 4.6% from 4.7% in the previous month, but that was still close to its highest level since August 2008. The five-year outlook picked up to 3.0% from 2.8% before, matching its highest level since 2011. Still, this is lower than the one-year outlook, which implies that consumers expect the current inflation spike to be mostly transitory.

The inflation report published by the Bureau of Labor Statistics provides details over several pages worth of categories. I scanned the report looking for items that were up more than 10% from July 2020 to July 2021. Here are several that caught my eye.

Below, a couple of charts with inflation data. See the full report here. 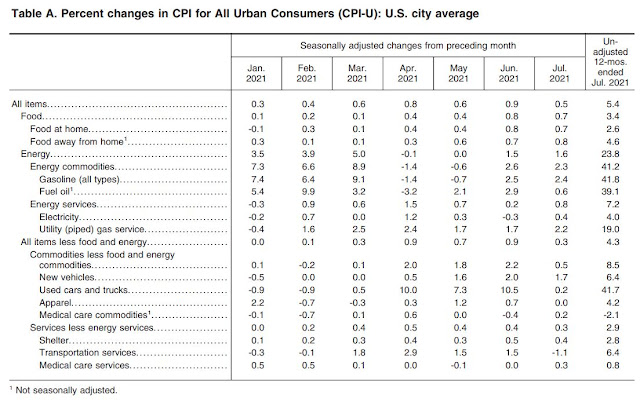