Higher taxes and increased government spending will generally slow economic growth. This correlation has been supported throughout history many times, but it's something not generally discussed by Democrats or the mainstream media.

Here's some examples to get started on the subject. Not everyone is in agreement, but I generally take the position that higher taxes and/or higher government spending takes resources from the private sector, which has a moderating affect on growth:

Regardless of where you'll end up deciding what is the "truth," the fact remains that the U.S. taxpayer spends too much money on taxes. According to a recent study by the Bureau of Labor Statistics (BLS), Americans spent more on taxes than on food, clothing, healthcare and entertainment, combined. 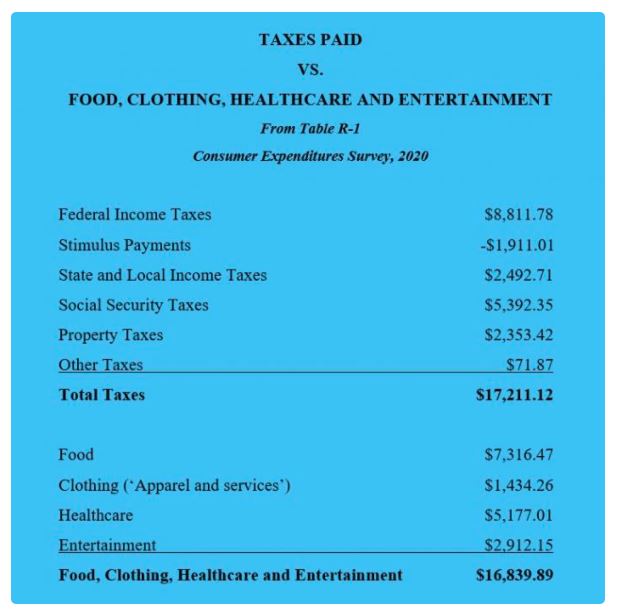 An yet, the Democrats are finalizing the "Biggest Tax Increase in History." Democrats on the House Ways and Means Committee are trying to wrap up their proposal for $2.9 trillion in tax hikes, which would mean the largest tax increase in decades, in order to help pay for higher spending in their 'reconciliation' package, Politico reported on Monday.
The Wall Street Journal reported that the proposal is expected to include raising the corporate tax rate to 26.5% from 21% and enacting a 3-percentage-point surtax on individual income above $5 million.

House Democrats are also thinking about boosting the minimum tax on the foreign income of U.S. companies to 16.5% from 10.5%, as well as raising the top capital-gains tax rate to 28.8% from 23.8%.
The significance of the proposals is that House Democrats have until now been vague about their plans to boost taxes as they try not to anger either moderates in the party concerned about the economic impact of increasing taxes or progressives who seek to raise taxes on the rich in order to expand the social safety net.
All this in conjunction with plans to spend $3.5 Trillion of money we don't have. It will all be borrowed, which will have an even worse affect on inflation, another hidden "tax."
Do Democrats really care about the average American? It would appear they do not.