Buried in the Budget Reconciliation Is the End of Right-to-Work, Independent Contractors; Climate Change

Among the various major provisions of the PRO Act is effective nationalization of California's AB5 law that passed in 2019. This law makes hiring independent contractors much more difficult and specifies that contractors must be reclassified by businesses that hire them as employees, unless they meet specific and rigorous standards allowing them to stay independent. Read full article...
Biden on Energy Crisis: Begging Others to Save Him From Himself
It is on the costs of energy where Biden’s failures are most starkly visible.
On his very first day in office, Biden scrapped the Keystone XL pipeline, killing 11,000 jobs in the process and making good on his campaign promise to be hostile to the fossil fuel industry.

Former President Donald Trump had propelled America to energy independence, but Biden has purposely squandered it. His policies are designed to reduce domestic production of petroleum, meaning we have become necessarily more reliant on foreign sources.

Biden’s approach has been an economic disaster.

According to The Wall Street Journal, the price of crude oil has jumped by 64% to a seven-year high. The cost of natural gas has doubled in just six months. Heating oil is more expensive by 68%, just in time for winter. And gasoline is over $3 per gallon on the national average, up by almost a dollar over the past year. Read full article...
Biden Caves To Unions Again, Sabotaging Consumers

Here's the biggest lie, straight from Transportation Secretary Pete Buttigieg. He went on parental leave in August, ignoring the worsening supply crisis. But he emerged from diaper duty long enough on Sunday to shovel some grown-up manure. Buttigieg said dysfunctional ports are "one more example of why we need to pass the infrastructure bill."

In truth, the $17 billion for ports in the infrastructure bill is mostly for emissions reductions, repairs and dredging. Nothing is allocated for labor-saving automation. In fact, section 30102 of Biden's Build Back Better Bill expressly prohibits the use of funds provided there to be used for automation. Read full article.
What’s Inside Democrats’ 2,465-Page $3.5 Trillion Spending Bill?

The “Biden administration is asking Congress to go … weaponize the IRS to spy on Americans,” Anderson says.

The future of the bill is unclear after Sen. Joe Manchin, D-W.Va., said he could not support a spending bill over $1.5 trillion. Anderson joins “The Daily Signal Podcast” to discuss how likely it is for the bill to move forward in Congress and what we know about the provisions in the package. Read full article.
Global Warming on Pause? 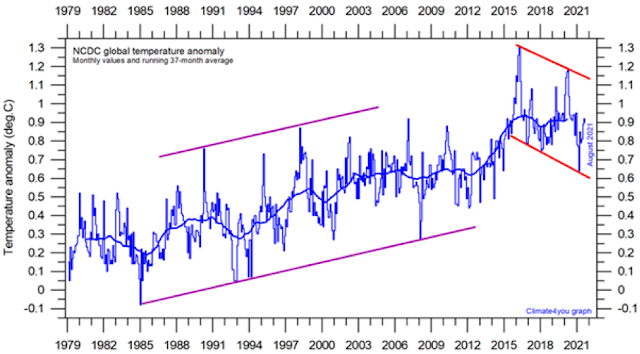