Wholesale inflation in the United States surged again last month, rising 9.7% from a year earlier in a sign that price pressures remain high at all levels of the economy.

The Labor Department said Tuesday that its producer price index — which measures inflation before it reaches consumers, or wholesale prices — jumped 1% from December. Excluding volatile food and energy prices, wholesale inflation rose 0.8% from December and 8.3% from January 2021.

The Producer Price Index (PPI) showed prices at the wholesale level in January rose 1.0% month-over-month (m/m), above the Bloomberg consensus estimate of a 0.5% gain, and north of December's unrevised 0.2% increase.
The core rate, which excludes food and energy, gained 0.8% m/m, above estimates of a 0.5% rise and above the prior month's unadjusted 0.5% rise. Y/Y, the headline rate was 9.7% higher, the same as the prior month, but higher than projections calling for a 9.1% gain. The core PPI increased 8.3% y/y last month, above estimates of 7.9% and equal to December's increase. 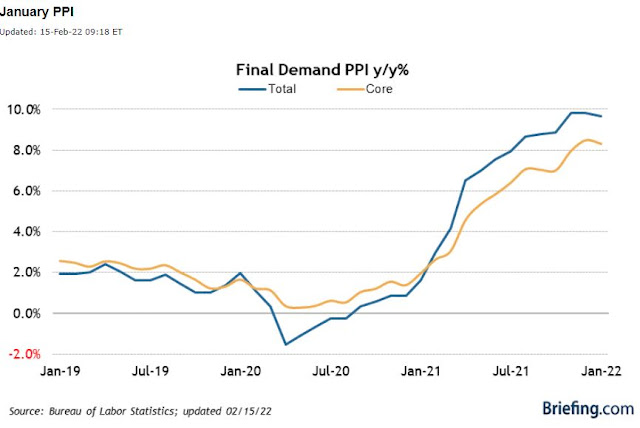 The Empire Manufacturing Index, a measure of activity in the New York region, showed the index moved back to a reading depicting expansion (a reading above zero) after surprisingly falling below the demarcation point last month. The index increased to 3.1 in February from -0.7 that was posted in January and compared to the Bloomberg estimate of an increase to 12.0.
The rise came as new orders and employment both increased, with the former moving back above zero, while the expansion in inventories accelerated, and prices paid dipped slightly but continued to be elevated.

As Q4 earnings season is set to roll on this week, of the 370 companies that have reported results in the S&P 500, 69.1% have topped revenue forecasts, while 76.4% have bested earnings expectations, per data compiled by Bloomberg. Compared to last year, revenue growth is on pace to be up nearly 16.3% and earnings expansion is on track for about 27.0%.
- February 15, 2022
Email ThisBlogThis!Share to TwitterShare to FacebookShare to Pinterest
Labels: Economy, Inflation, Markets