This plan would actually benefit the wealthy more than the poor.

It might be the biggest giveaway in American history and goes much further than anything Bernie Sanders or Elizabeth Warren have proposed. Biden now wants to cancel more than $1 trillion dollars in student loans – he's already let college graduates delay repayments for years.

This plan makes suckers out of the millions of Americans who have felt honor bound to pay off their debts. Even more lavishly subsidizing higher education will only push tuition even higher and making the next round of student debt even higher. But who would ever pay off a student loan after this blanket forgiveness program.

Who would benefit? The most recent Federal Reserve Survey of Consumer Finances found that only 22% of families had student loan debt and "student debt has consistently been disproportionately held by higher-income families."

Canceling all student loans is supported by 19% of voters according to the latest poll – but times are getting desperate at the White House, and a trillion dollars can buy a lot of votes from the dead beat crowd.
Of course, 43% of Democrats strongly support extending the student loan payment pause, while only 12% of Republicans do. 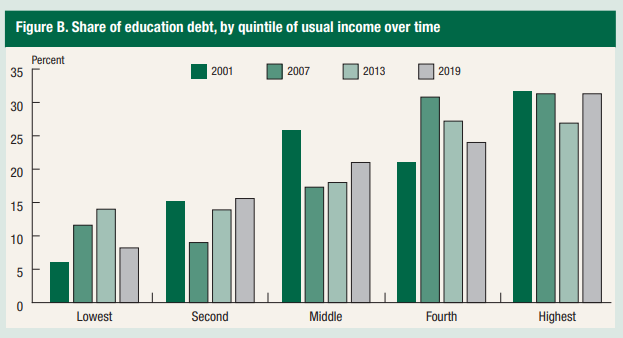