Climate: Just Who Owes Who?

See also: Biden Forces America to Pay Climate Reparations
I've written about the business and purpose behind climate change before. The climate change movement is really just a climate change shake down. This crusade isn’t about changing the temperature of the earth. Even the most well-meaning environmental activist can’t really believe that building windmills and driving Teslas is going to cool the planet.

This all about money. Hundreds of billions of dollars of government handouts.

The one resolution of agreement among the politicians from 100 nations at the “Cop 27” climate conference in Egypt was that rich nations owe poor nations “climate reparations.” This is the looney concept that America is responsible for the supposed man-made warming of the planet by burning fossil fuels over the last hundred or so years. Joe Biden and his goof ball sidekick John Kerry were all to eager to buy into this “blame America first” narrative and write a 10-figure check to atone for our sins.

The conference in Egypt erupted into wild applause in the final hours when the multi-billion wealth transfer from American taxpayers to corrupt foreign governments like Venezuela was announced.

Wait!!! Biden thinks WE owe the rest of the world money for burning fossil fuels? Really? What have poor nations ever done for us? These supposed satanic fossil fuels have been the power source that liberated the world from human misery. They turned the lights on. They powered our factories, our transportation system, our technology industry, our homes, our hospitals our schools. This was a crime against humanity?

Fossil fuels made America rich and made the U.S. the bread-basket of the world helping end hunger and famine while developing drugs and vaccines that eradicated deadly diseases across the planet. They were the fuels used to help America win three world wars (counting the Cold War) on foreign soil against murderous fascist/communist regimes. To paraphrase Jack Nicholson in A Few Good Men: “A simple THANK YOU [from the rest of the world] would suffice.”

Oh, and was it mentioned that China and India skipped out of the conference this year. These are by far the two largest polluting nations (see chart). And they want no part of this war on fossil fuels. A climate change deal without China and India signing on would be like a peace agreement during the middle of World War 2 - except the bad news is that Germany and Japan aren’t on board. 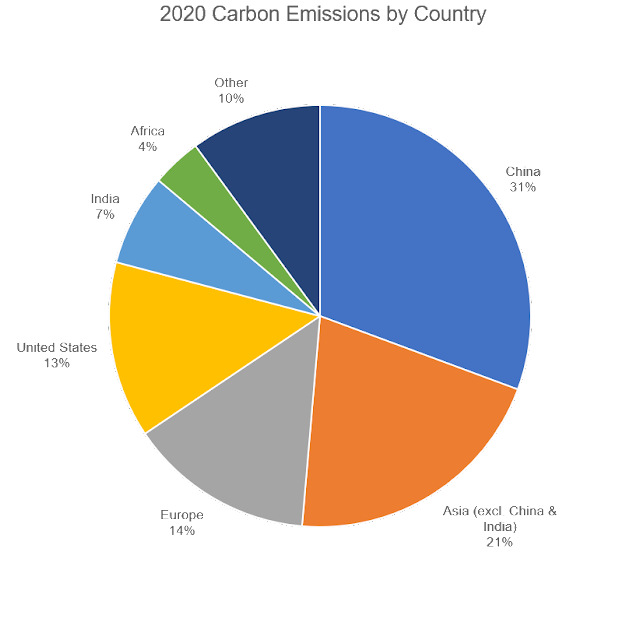