The 'Heros' Act: Democrats new stimulus much more than stimulus

The House of Representatives passed the Health and Economic Recovery Omnibus Emergency Solutions Act – the HEROES Act for short -- a $3 trillion follow-on relief package to the $2.2 trillion package signed into law in March.

The bill passed the House on a vote of 208 to 199. Lawmakers had less than three days to consider the 1,800 pages of legislation.

There has already been roughly $3 trillion in coronavirus response spending approved. The Heroes Act contains another $3 trillion, for a total of $6 trillion. This $6 trillion is more than $18,000 for every person in the United States. Or more than $72,000 for a family of four.

Only a fraction of this is to pay for direct COVID-19 related health-care expenses. The bulk of it is to prop up the economy in one way or another.

According to an analysis by the Tax Foundation, that equals 88% of everything state and local governments in the United States were projected to collect in local taxes, prior to the pandemic. That’s vastly in excess of even the most dire prognostication of what the pandemic hit to local revenues will be.


Pelosi could never have imaged that her new HEROES bill could have passed the Senate and/or been signed into law by President Trump. She's been around Washington long enough to know this, but I think her strategy is that when the bill fails to pass, she can blame the Republicans and Trump on not helping the American people.

Unlike the last four coronavirus relief measures, the HEROES Act isn't a product of bipartisan negotiations. House Speaker Nancy Pelosi has defended the ambitious package, arguing that "we must think big for the people now, because if we don't it will cost more in lives and livelihood later. Not acting is the most expensive course."

That's my theory, anyway. Pelosi has always been about power politics; she doesn't care who she helps.

According to the Institute on Taxation and Economic Policy, the Heroes Act also includes a retroactive change to the CARES Act, which included the first round of stimulus checks. The change allows illegal immigrants who file taxes using an ITIN to receive money from initial payments.


Money to study diversity in cannabis

For example, the word "cananbis" appears more in the bill than the word "job," some 68 times. The Health and Economic Recovery Omnibus Emergency Solutions (HEROES) Act, includes a provision that would protect banks that service marijuana businesses from being penalized by federal regulators. The measure includes language requiring research on minority-owned and women-owned marijuana companies.

Representative Jodey Arrington (R-Texas) said it's "suspicious" when more language is devoted to marijuana than jobs.

"You know something is suspicious when the word 'cannabis' is used 68 times—more than 'job' or 'jobs' combined—in an economic stimulus bill. I'm not sure what they were smoking, but whatever socialist euphoria they're feeling will fade fast when it arrives in the Senate," he tweeted.


What else? Something for everyone

Five million dollars for new laptops and other tech equipment for members of Congress.

Aside from items intended to directly aid the nation's COVID-19 recovery like rental assistance, student loan bailouts, cash payments to Americans and money for state and local governments whose budgets have been wrecked by the pandemic, some of the priorities that Democrats tucked into the latest 1,800-page proposal include $50 million in "environmental justice" grants to study how communities with disproportionate environmental issues for poor and minority residents were impacted by COVID-19.

Another $40 million would go the U.S. Geological Survey for research related to wildlife-borne disease. The novel coronavirus is believed to have begun with animals before humans were infected.

At least $5 million in the bill would go to museums and libraries, while $250 million would be set aside for grants to help formerly incarcerated people and prevent recidivism.

Everybody gets something, it seems

Money for the U.S. Department of Agriculture to study soil health.

Pelosi and her fellow House Democrats are seeking a more than $1 trillion federal bailout for state and local governments. This is in addition to the unprecedented aid Congress already has sent.

Instead of waiting on a handout from Washington, states should clear the way for a more robust economic recovery by addressing their unsustainable finances.

States and local government spending has increased over the recent past, demonstrating room for targeted spending cuts.

But not all states spend equally. As of 2017, Florida, Georgia, and Arizona spent about $5,800 per person on state and local governments, but New York spent more than $11,700 per person. 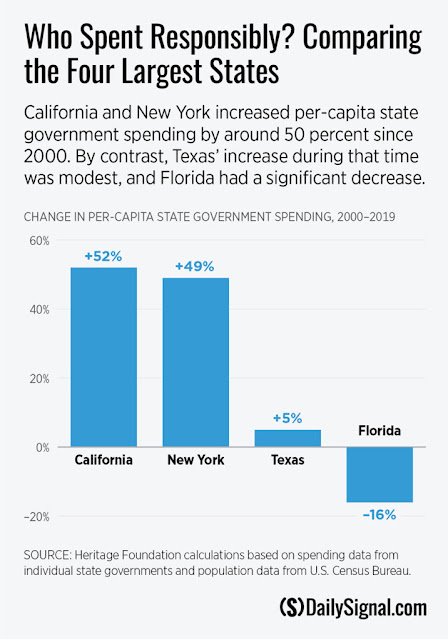 The released version of the bill reduced the forgiveness, but still provided meaningful student loan student relief, including the following:

Senate leadership has already described the HEROES Act as “dead on arrival,” before the final version even passed. The Senate is not likely to return to Washington until sometime in June, so no quick action will be taken. The President has also indicated that he opposes the House bill. However, the Democratic House leadership views the passage of this bill as an important negotiating step in crafting a final stimulus bill that can win over sufficient votes in both chambers of Congress to become law.

The bill touches every aspect of Federal law and American life

The bill also modifies or expands a wide range of other programs and policies, including those regarding


However, being signed into law is not entirely the mission of the HEROES Act.
"Instead, its passage was meant for Democrats to demonstrate their priorities and signal what they will fight for in a later bipartisan bill that could pass in June," Business Insider's Kimberly Leonard reported.
- May 16, 2020
Email ThisBlogThis!Share to TwitterShare to FacebookShare to Pinterest
Labels: Democratic Party, Economics, Government, Politics