Note: Rather than wait until Friday, I'll try to update daily, as new reports and information becomes available.
Each of the major indices set all-time highs this week, powered higher by growth stocks and value stocks alike. The Nasdaq Composite claimed the winning spot with a 2.1% gain and was followed by the Russell 2000 (+2.0%), S&P 500 (+1.7%), and Dow Jones Industrial Average (+1.0%).

Nine of the 11 S&P 500 sectors contributed to the advance. The energy sector rallied 4.5%, and the information technology sector rose 2.8%. The utilities sector (-2.2%) was the weakest link by a wide margin.

Regional factory activity moderates
The Chicago Business Barometer fell 2.9 points in November to 58.2, below the consensus of 59.1, indicating some moderation in factory activity growth in the region. New orders and production both grew at slower rates, a sign of softer demand. Inventories eased to a three-month low. Employment remained in contraction territory for the 16th consecutive month. Supplier deliveries slowed significantly. Prices rose at the quickest pace in over two years.
Similarly, the Texas Manufacturing General Business Activity Index slipped 7.8 points to 12.0 in November, also indicating somewhat slower growth. The six-month outlook for business activity in the region cooled. Respondents shared a similar assessment with respect to their own companies. Production, shipments, and new orders came down. The inventory drawdown intensified and supplier deliveries slowed. But employment and capex picked up, a hopeful sign that the moderation in growth could be only temporary.
All six regional factory activity indexes we follow remained in expansion territory in November, but all posted lower readings than in the previous month. This suggests a similar directional change for the ISM Manufacturing Index, which will update later this week.
Pending home sales off slightly
Pending home sales edged down 1.1% in October, its second straight decline, and contrary to the consensus of a 2.0% gain. Even so, pending sales were still 20.2% higher than a year ago, near its fastest pace since the spring of 2010. All four regions posted double-digit y/y gains. This suggests that existing home sales will remain strong in the near-term.
Record low mortgage rates and pandemic-driven demand for larger and/or secondary homes have boosted contract signing activity and home sales this year. Combined with scarce inventory, this has led to a significant appreciation in home values. While this creates a positive housing wealth effect for existing home owners, it has begun to chip away at housing affordability, particularly for first-time homebuyers, as noted by the NAR.
Manufacturing, construction data continues to show solid growth

The November Institute for Supply Management (ISM) Manufacturing Index showed manufacturing slowed slightly but remained comfortably in expansion territory (a reading above 50). The index declined to 57.5 from October's unrevised 59.3 level, and versus the Bloomberg consensus estimate of 58.0. The larger-than-expected deceleration came as new orders and production growth slowed, and employment fell back into contraction territory. Prices remained elevated.

The ISM said, "The manufacturing economy continued its recovery in November. Survey Committee members reported that their companies and suppliers continue to operate in reconfigured factories, but absenteeism, short-term shutdowns to sanitize facilities and difficulties in returning and hiring workers are causing strains that will likely limit future manufacturing growth potential." However, the ISM added that panel sentiment is optimistic, improving compared to October.

The final November Markit U.S. Manufacturing PMI Index was unrevised from the preliminary level of 56.7, matching forecasts, and above October's 53.4 level. A reading above 50 denotes expansion. The release is independent and differs from ISM's report, as it has less historic value and Markit weights its index components differently, while it surveys a wider range of companies.

Construction spending rose 1.3% month-over-month (m/m) in October, versus projections of a 0.8% gain, and following September's downwardly-revised 0.5% decrease. Residential spending grew 2.9% m/m but non-residential spending was flat.
ADP's November employment report misses
The ADP Employment Change Report showed private sector payrolls rose by 307,000 jobs in November, below the Bloomberg forecast calling for a 440,000 gain. October's rise of 365,000 jobs was revised to a 404,000 increase. Today's ADP data, which does not include government hiring and firing, comes ahead of Friday's broader November nonfarm payroll report, expected to show headline employment grew by 486,000 jobs and private sector jobs rose by 560,000 (economic calendar). The unemployment rate is forecasted to dip to 6.8% from 6.9% and average hourly earnings are projected to tick 0.1% higher month-over-month (m/m), and be up 4.2% y/y.
MBA Mortgage Application index declines

The MBA Mortgage Application Index declined by 0.6% last week, following the prior week's 3.9% gain. The decrease came as a 4.6% drop in the Refinance Index more than offset a 9.0% jump in the Purchase Index. The average 30-year mortgage rate remained at 2.92%.
Fed Beige Book shows continuing signs of economic recovery
The Fed released its Beige Book report Wednesday afternoon (Dec 2) —an anecdotal look at business activity across all the Fed Districts—a tool used by monetary policymakers in preparation for its next two-day meeting scheduled to conclude on December 16th. The report showed continuing signs of an economic recovery, with economic expansion characterized as modest or moderate, however also noted that several Districts described little or no growth in early November. The release highlighted higher-than-average growth in manufacturing, distribution and logistics, homebuilding, and existing home sales, but also deteriorating loan portfolios for commercial lending in the retail and leisure and hospitality sectors. Finally, the report indicated that most outlooks remain positive, but optimism has waned due to concerns over “the recent pandemic wave, mandated restrictions, and the expiration dates for unemployment benefits and for moratoriums on evictions and foreclosures.”
Jobless claims moderate more than expected
Weekly initial jobless claims came in at a level of 712,000 for the week ended November 28, below the Bloomberg estimate of 775,000 and the prior week's upwardly-revised 787,000 level. The four-week moving average declined by 11,250 to 739,500, while continuing claims for the week ended November 21 fell by 569,000 to 5,520,000, south of estimates of 5,800,000. The four-week moving average of continuing claims dropped by 425,500 to 6,194,250.
November services data continue to show growth
The November Institute for Supply Management (ISM) non-Manufacturing Index showed expansion in the key services sector (a reading above 50) decelerated by a slightly smaller amount than anticipated, declining to 55.9 from October's 56.6 level, and modestly above forecasts of a decrease to 55.8. The index slipped as the new orders and business activity components both declined but remained comfortably above the key 50 level, while employment growth accelerated. The ISM said, "Respondents' comments are mixed about business conditions and the economy. Restaurants continue to struggle with capacity constraints and logistics. Most companies are cautious as they navigate operations amid the pandemic and the aftermath of the U.S. presidential election."
The final Markit U.S. Services PMI Index for November was unexpectedly revised higher to 58.4 from the preliminary estimate of 57.7, and versus forecasts of a modest downward adjustment to 57.5. The index was up from October's 56.9 figure and the 51.6 reading a year ago. A reading above 50 denotes expansion. Markit's release is independent and differs from the ISM report, as it has less historic value and Markit weights its index components differently, while its survey respondents include those that vary more in size, including small and medium-sized companies.
Energy transition could cost $40 trillion
If the world is to come anywhere close to limiting global warming to 2 degrees Celsius or below, it will need a bare minimum of US $30 trillion to US $40 trillion of investment in energy systems and decarbonization of industries where emissions are notoriously hard to abate such as steel and cement making, according to Wood Mackenzie.
OPEC+ compromises on small production hike of 500K bpd starting January
As of Thursday, crude futures are hovering around the unchanged mark (CL @ $45.74 per barrel) as traders digest OPEC+ members agreeing to small production hikes in the new year. Delegates say they will start to increase output by 500K bpd starting in January and will assess from there. Saudi Arabia had been pushing for a three-month extension of current cuts, but the UAE objected noting that other countries still weren't in compliance with that agreement.
Discord characterized the OPEC+ meeting this week, and concerns grew that the group would fail to agree to postponing the planned production increases. But in the end, instead of allowing cuts to ease by 2 mb/d, the group agreed to monthly incremental production increases of just 0.5 mb/d. They also agreed to meet monthly going forward in early 2021 to assess the health of the market. The deal was not as bullish as market analysts had expected, but neither was it a failure. The reaction in oil prices suggests OPEC+ did enough to maintain market stability.
Meanwhile, the Baker Hughes North American rig count increased to 425 from 422, reported on Dec. 4, 2020. 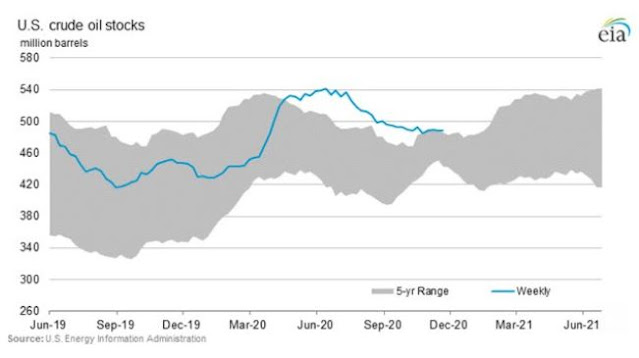 Economists surveyed by Dow Jones had been looking for 440,000 and the jobless rate to decrease to 6.7% from 6.9% in October.

The unemployment rate met expectations, though it fell along with a drop in the labor force participation rate to 61.5%. A more encompassing measure of joblessness edged lower to 12% while the number of Americans outside the labor force remains just above 100 million.

The November gain represented a pronounced slowdown from the 610,000 positions added in October.

In all, the economy has brought back 12.3 million of the 22 million jobs lost in the first two months of the crisis. There are still 10.7 million Americans considered unemployed, compared with 5.8 million in February.

The total of permanent job losers remained at 3.7 million in November, but is up 2.5 million from February.
Trade balance smaller than expected
The trade balance showed that the October deficit widened by a smaller amount that anticipated, coming in at $63.1 billion, compared to forecasts of $64.8 billion, after September's downwardly-revised deficit of $62.1 billion. Exports rose 2.2% m/m after September's 2.4% gain, and imports increased 2.1% after the prior month's 0.6% rise. A deficit means the U.S. imported $63.1 billion more than it exported.

The key takeaway from the report is the rise seen in both imports and exports, as that is symptomatic of a pickup in global trade and economic activity.
Factory orders rise
Factory orders rose 1.0% m/m in October, versus estimates of a 0.8% gain, and compared to September's upwardly-revised 1.3% gain. This was the sixth-straight monthly rebound from the historic 13.5% tumble in April which followed the 11.0% fall in March.
- December 05, 2020
Email ThisBlogThis!Share to TwitterShare to FacebookShare to Pinterest
Labels: Economics, Finance, Markets