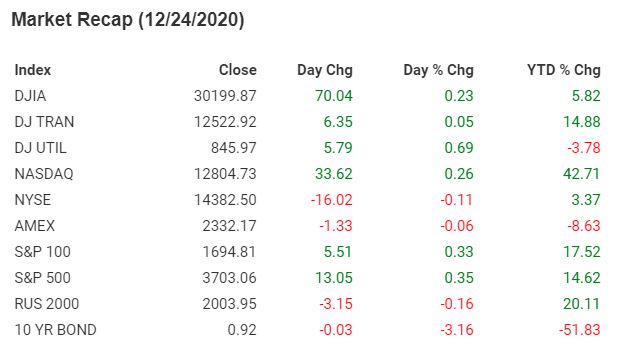 The economic calendar for Dec. 21, 2020, is void of any major releases but is poised to deliver some key reports later this week that could command attention. We will get the final read (of three) on Q3 GDP, the Conference Board will post its Consumer Confidence report, preliminary November durable goods orders will hit the tape, November personal income and spending data will be released, and the University of Michigan will offer up its revised look at consumer sentiment for this month. Housing data will also continue, with the releases of existing and new home sales for last month, while a timely read on jobless claims for the week ended December 19 will be pulled forward to Wednesday due to the holiday.
CFNAI shows recovery is slowing
The Chicago Fed National Activity Index (CFNAI) fell 0.74 points in November to 0.27, the smallest positive reading of the past seven months. The three-month average of the CFNAI decreased 0.29 points to 0.56, its lowest level since June. Both the headline index and its trend indicate that the economic recovery has lost momentum in Q4 amid spiking COVID cases and waning fiscal stimulus.
All four broad categories of indicators declined in November, although three of the four still made positive contributions. The CFNAI Diffusion Index, based on 89 individual indicators, slipped to 0.53 from 0.62. While off its peak in July and August, this index is still at one of its highest readings since December 1999, a sign that the recovery remains broad-based, although the pace has slowed.
As the rollout of COVID vaccines has begun and Congress has agreed on another fiscal relief bill, the economy should avert another deep contraction similar to the lockdown recession this past spring. Nevertheless, it may be several months before the positive impact from a widespread vaccination is felt. This is a key reason why a weak start to 2021 should be expected, before economic activity ramps up in the second half of the year.
GDP revised higher
The final look (of three) at Q3 Gross Domestic Product, the broadest measure of economic output, showed a quarter-over-quarter (q/q) annualized rate of expansion of 33.4%, above forecasts calling for it to remain at the 33.1% posted in the second release. Q2's figure was unadjusted at a 31.4% plunge. Personal consumption was revised to a 41.0% increase for Q3, ahead of expectations to remain at 40.6%. Q2 consumption was unrevised at a 33.2% drop.

On inflation, the GDP Price Index was downwardly revised to a 3.5% rise from the prior 3.6% increase and where it was expected to remain, while the core PCE Index, which excludes food and energy, was also revised slightly lower to a 3.4% advance from the prior 3.5% gain.
Consumer confidence falls

The Conference Board's Consumer Confidence Index (chart) declined more than expected to 88.6 from November's downwardly revised 92.9 level, and versus the Bloomberg consensus estimate calling for an increase to 97.0. The softer-than-expected read came as the Present Situation Index portion of the survey fell noticeably, while the Expectations Index of business conditions for the next six months rose from the prior month's downward revision. On employment, the labor differential—consumers’ appraisal of jobs being "plentiful" minus being "hard to get"—fell into negative territory, posting a reading of -0.2 following the 6.9 level posted in October.
The Reuters/University of Michigan Consumer Sentiment Index slipped 0.7 points from its preliminary December reading to 80.7, below the consensus of 81.0. But it was still 3.8 points higher than in the previous month, with both current conditions and expectations advancing. Sentiment has bounced back from its low in April, but is still more than 20 points below its pre-recession level. On a y/y basis, it is down 18.7%, historically consistent with a bearish outlook for consumer spending and the economy.

Of the four major regions, the Northeast, Midwest and South each experienced m/m declines, while the West was unchanged from the prior month. All regions saw gains year-over-year (y/y). Sales of single-family homes and purchases of condominiums and co-ops were down m/m, but up y/y. The median existing home price was up 14.6% from a year ago to $310,800, marking the 105th straight month of y/y gains as prices rose in every region. Unsold inventory came in at an all-time low of a 2.3-months pace at the current sales rate, down from 2.57-months in October and the 3.7-months pace a year earlier. Existing home sales reflect contract closings instead of signings and account for a large majority of the home sales market.

National Association of Realtors Chief Economist Lawrence Yun said, "Home sales in November took a marginal step back, but sales for all of 2020 are already on pace to surpass last year's levels," adding, "Given the COVID-19 pandemic, it's amazing that the housing sector is outperforming expectations. Circumstances are far from being back to the pre-pandemic normal," he said. "However, the latest stimulus package and with the vaccine distribution underway, and a very strong demand for homeownership still prevalent, robust growth is forthcoming for 2021."
Weekly initial jobless claims lower, but still high

The MBA Mortgage Application Index rose by 0.8% last week, following the prior week's 1.1% rise. The increase came as a 3.8% rise in the Refinance Index more than offset 4.6% decrease in the Purchase Index. The average 30-year mortgage rate nudged 1 basis point (bp) higher to 2.86%.

November preliminary durable goods orders (chart) rose 0.9% month-over-month (m/m), versus estimates of a 0.6% rise and compared to October's upwardly revised 1.8% increase. Ex-transportation, orders increased 0.4% m/m, versus forecasts of a 0.5% gain and compared to October's favorably adjusted 1.9% rise. Moreover, orders for non-defense capital goods excluding aircraft, considered a proxy for business spending, were up 0.4%, compared to projections of a 0.6% rise, while the prior month's figure was upwardly revised to a 1.6% increase.
Personal income and spending decline
Personal income fell 1.1% in November, down in five of the past seven months, and worse than the consensus of -0.3%. Disposable personal income fell 1.2%. Proprietors’ income sank 8.5% amid falling COVID-related payments to farmers and ranchers and a decline in PPP loans to businesses. Net transfer payments from the government fell 5.5%, reflecting the runoff in unemployment benefits and wage assistance programs related to the pandemic. Employee compensation growth moderated to 0.4%. Only rental income and receipts on assets accelerated from the previous month, up 0.5% and 0.6%, respectively.
The drop in income weighed on personal consumption expenditures (PCE), which fell 0.4%, down for the first time since April, and matching the consensus. Real PCE was also off 0.4%, led by a 1.7% decline in real durable goods spending. The partial lockdowns across the country amid the surge in COVID cases contributed to a 0.2% decline in real services spending, down for the first time since April. The personal saving rate inched down to 12.9% from 13.6%, but it was still near its highest level since 1981. While a higher saving rate could help consumers withstand future crises, it acts as a drag on growth in the near-term.
On a y/y trend basis, real PCE declined 2.1%. The negative momentum has eased since the spring, as income growth (the primary driver of spending) was boosted by the unprecedented government support. With the pandemic not yet under control and the labor market still struggling, the latest COVID relief bill approved by Congress should support both income and spending, reducing the downside risk to the economy.
Inflation was nonexistent. Both the PCE Price Index and its core were unchanged from the previous month. On a y/y basis, headline and core PCE prices eased to 1.1% and 1.4%, respectively. With inflation well below 2.0%, the Fed will remain accommodative for the foreseeable future.