Wright, the founder of the Deep South Center for Environmental Justice, is joined on the council by Jade Begay of the Indigenous Environmental Network, who co-wrote a 2018 op-ed in EcoWatch contending that climate change is “colonialism” and “cultural genocide.”
In February, Vox reported on Wright’s conflating racial discrimination and energy development.

“People often forget the legacies of slavery, of Jim Crow segregation, and out of that chain, laws that were deeply entrenched within the social structure of the Southern environment that worsened our quality of life,” she told Vox.

“That legacy resulted in communities that had been inundated with toxic facilities, impacting our health, the value of the homes where people live, causing them to have higher cancer rates, and to eventually be relocated from within the midst of these facilities,” Wright said.

Days before her March 29 appointment to the White House council, Wright gave testimony at a Department of Interior forum, asserting racism is “central” to fossil fuel operations, saying that she hopes Interior Secretary Deb Haaland takes action.
Biden has named several activists that tie energy development to racial bigotry to the Environmental Justice Advisory Council.
The council has 26 members representing six regions across the country as well as Puerto Rico, plus officials from the EPA and the White House Council on Environmental Quality.

The Biden administration’s budget proposal includes $1.4 billion on “environmental justice” initiatives.“The [fiscal year] 2022 discretionary request for EPA makes historic investments to tackle the climate crisis and to make sure that all communities, regardless of their [ZIP] code, have clean air, clean water, and safe places to live and work,” EPA Administrator Michael S. Regan said Friday in a statement.
Biden also appointed Susana Almanza, founder of the Austin, Texas-based People Organized in Defense of Earth and Her Resources, to the council.

A mostly favorable 2019 article in Hilltop Views, the student newspaper of St. Edward’s University in Austin, noted that Almanza’s office had a poster on the wall of Che Guevara, a murderous military commander in Fidel Castro’s Cuban communist regime. 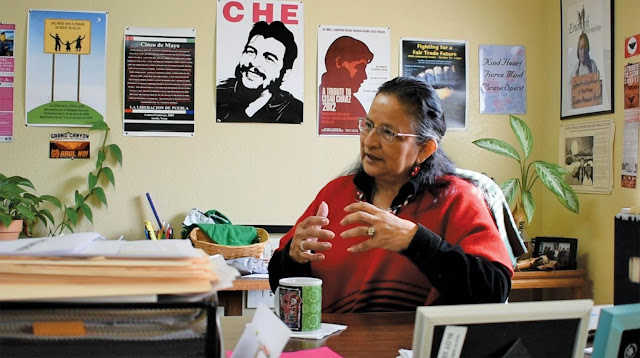 Susanna Almanza in her Austin Office
The article quoted Almanza saying of energy companies, “we are fighting big monsters; they’re not little ones.” She added that zoning of polluting chemical plants “look[ed] at people of color as indispensable [sic] … like ‘it’s OK if we pollute them and if they die or if they get cancer.’”
Whether actual policy gets developed and enacted from this advisory council remains to be seen, but if so, will have long-lasting affects on energy production and how the government attempts to pick winners and losers. The bottom line could be much higher energy costs for the consumer -- gas prices and prices for heat and electricity. These type of policies always have unintended consequences, usually adverse and usually negatively impacting the people they pretend to help.
- April 12, 2021
Email ThisBlogThis!Share to TwitterShare to FacebookShare to Pinterest
Labels: Biden, Energy, Left