Breaking news: Tonight (Feb 14, 2019), Nancy Pelosi claimed that the problems at our southern border were a crisis created by President Trump, an illusion of his own making. She needs to retire. She's 78 and has been in Congress for 32 years.

I generally don't write about politics, but recent events need addressing, because they affect our economic well-being.

I've come to the conclusion that many -- or most -- politicians do not understand even the basic principles of economics. Or if they do, they don't care and have decided just to push an ideology that has nothing to do with sound economics. Some are just dishonest.

I won't try to educate you on economics here. If you don't know, get some education. It's vitally important, both for your personal finances and who to vote for.

Being dumb is not a partisan issue. Both Democrats and Republicans suffer from the problem.

But I'm going to pick on Democrats right now, because some have just proven how dumb -- or dishonest -- they can be. 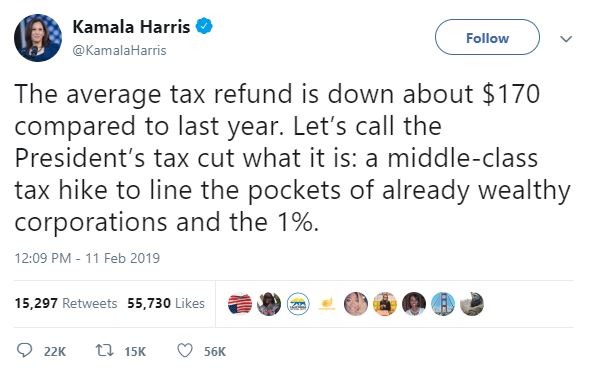 What wrong with this tweet? Basically everything. First of all, and least importantly, the sample size on which she's basing her assertion is very small, coming from a tiny sliver of filings from the very beginning of tax season. More importantly, the size of someone's tax refund is not at all reflective of whether they paid more or less in taxes than the previous year. While this was reported by the MSM, Barron's has debunked it.

Harris' lie earns Four Pinocchios from the Washington Post. It's ham-fisted garbage specifically designed to confuse people into thinking they're in worse financial shape than they are.

Then there is the New Green Deal. Anyone who supports this has to be either mentally ill, or just plain stupid. In my opinion. While liberal-slanted CNN spins it in a more positive light, and the New York Times says "The Green New Deal is What Realistic Environmental Policy Looks Like," it's really a massive increase in government size and control.

By any measure, the resolution is preposterously extravagant. On one estimate the proposed new entitlements and public works would cost $6.6 trillion a year, which is two-thirds larger again than out $4 trillion federal budget. No one has said yet how we would pay for this, other than "taxing the rich." They don't have enough money.

Some say the bill would be self-funding because it would stimulate the economy. Others are punting on cost-free debt. According to modern monetary theory (MMT), governments can simply create new money without causing inflation. MMT is wrong.

If these programs were passed into law, the federal government would take over our health care system (more than it is now; there would be no private insurance), our wages, our energy, our housing, and our transportation sectors.

The United States would no longer be a free-market country, based on capitalism, a economic system which has created more prosperity than humans have ever known. 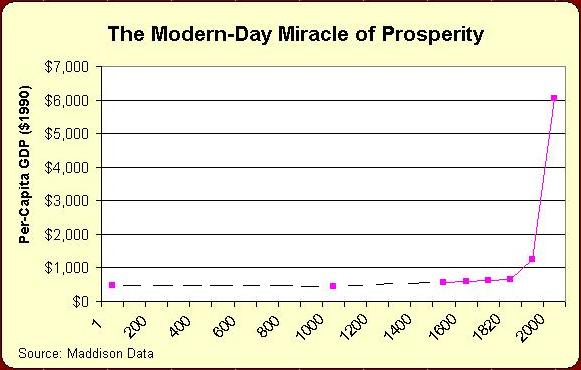 People supporting ideas like this, or socialism in general, are either in denial or just plain ignorant. Socialism has never worked, except to create shortages and poverty.

The number of people who do support these ideas scares the crap out of me. I am truly afraid for future generations.
- February 14, 2019
Email ThisBlogThis!Share to TwitterShare to FacebookShare to Pinterest
Labels: Democratic Party, Economics, Politics