A Roaring Giant or Crying Baby? 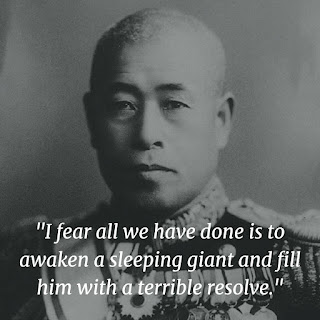 Marshal Admiral Isoroku Yamamoto commanded the Imperial Japanese Navy in World War II until he was killed in April 1943. Despite the dialogue from the 1970 WWII film "Tora! Tora! Tora!" Yamamoto probably did not say in the aftermath of the Pearl Harbor attack, "I fear all we have done is to awaken a sleeping giant and fill him with a terrible resolve."

But Yamamoto likely either wrote or said something similar: "I can run wild for six months ... after that, I have no expectation of success."

Yamamoto summed up a general feeling among the Japanese admirals that the huge industrial capacity of the U.S. -- which had been asleep during the Great Depression -- along with the righteous anger and frenzy of an aroused American democracy would ensure the destruction of the Japanese Empire in short order.

In 1940, there were fewer than 500,000 service members in the U.S. military. At the time of the Pearl Harbor attack, that number had grown to nearly 2.2 million. By 1945, more than 12 million Americans were in the armed services. It was an astonishing mobilization for a nation of fewer than 140 million people.

The U.S. Navy ended the war with a fleet eight times larger than it was at the time of the attack on Pearl Harbor. The American armada would become larger in total tonnage than all the world's fleets in 1945 combined.

More incredible, by the end of 1944, the American gross domestic product exceeded the economic output of all the major belligerents on both sides of World War II put together: the Soviet Union, the United Kingdom, Japan, Italy and Germany.

As we struggle to defeat the coronavirus, an aroused America is talking grandly of restructuring the U.S. economy.

There are other vows to recalibrate our relationship with China to ensure that when the next successor to SARS and COVID-19 hits, American lives will not be jeopardized by the duplicity of the Chinese government. At the beginning of the outbreak, Beijing hid the origins, nature and transmissibility of the virus, then lied about its supposedly brilliant control of the epidemic.

Does the U.S. really need almost 15,000 people flying in from China each day? At a time when American students owe $1.5 trillion in student loans, it is smart to have some 360,000 Chinese students enrolled in U.S. colleges? Is it safe to fund hundreds of labs on university campuses that conduct joint research with Chinese academics?

Does the United States really wish to curtail fracking, which has made it the largest producer of natural gas in the world and ensured that a quarantined America has plenty of fuel?

Is it prudent to release precious irrigation water out to the Pacific Ocean when California is the richest and most diverse producer of food in America?

Post-virus America can awake from this epidemic and economic shutdown in one of two different ways.

One, we can wake up as we did on December 8, 1941, to ensure that Americans control their own fundamentals of life -- food, fuel, medicine and strategic industries -- without dependency on illiberal regimes. The military can refocus our defenses against nuclear missiles, cyberwarfare and biological weapons. On the home front, diversity is fine, but in a national crisis as serious as this one, the unity that arises from confidence in shared American citizenship saves lives.

Our other choice is to keep bickering and suffering amnesia, remaining as vulnerable as we were in the past.

We can scapegoat and play the blame game. We can talk not of an America in crisis, but of the virus' effects on particular groups. We can decide that it is mean or even racist and xenophobic to hold the Chinese government accountable for its swath of viral destruction -- and so we will not.

We can ridicule the idea of Americans again making their own things and call it protectionism or economic chauvinism. We can conduct endless congressional inquiries about who said what and when about the virus, and perhaps reopen impeachment.

Or we can have bipartisan commissions decide how best to return key industries to the U.S., prepare for the next epidemic, and pay down the enormous debt we have incurred to defeat COVID-19.

In other words, the choice is ours whether America awakens as a roaring giant or a crying baby.
- April 09, 2020
Email ThisBlogThis!Share to TwitterShare to FacebookShare to Pinterest
Labels: Economics