Why the News Media Has Failed Us in this Crisis 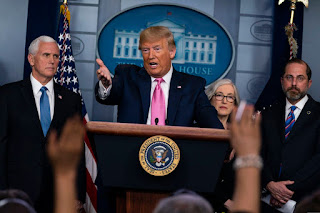 Watching the media deal with the daily White House briefings reminds the country that we have never had journalism of this low character before—not in the acrimony over the Founding, not in the furor during the Civil War, not even in the age of yellow journalism at the turn of the 20th century.

Reporters do not wish to transmit knowledge to the public that might aid in confronting the virus. They do not even wish to clarify murky statements from public officials to ensure Americans know exactly what the government wants them to do.

Instead, journalists during White House briefings fixate on two agendas.

One is to goad the president into saying something sloppy, by repeatedly suggesting that in reacting to the virus, he was in error, that he is cruel and heartless, or that he is dangerous. That gotcha obsession explains why the media can call Trump a xenophobe and racist for issuing a travel ban against China—contrary to the earlier advice of WHO, the Centers for Disease Control, the media, and the entire Democratic Party hierarchy—then silently support it. It explains why they then use doctored Chinese data and propaganda from the Chinese Communist Party to convince Americans that China—a nation that lied about the origins, spread, and nature of the virus—is admirably doing a
better job in containing the virus than is their own country. Even the media cannot keep straight their own anti-Trump gymnastics.

If evidence convinces Trump to let the public know that hydroxychloroquine and azithromycin are efficacious in treating patients infected with coronavirus, then reporters will seek to persuade Americans that such off-label uses have no utility and are dangerous—even if they have to stoop to find some nut who drank fish-tank cleaner, clearly marked unfit for human consumption, to argue that a nonpotable chloroquine derivative cleaning agent provides proof of “Dr.” Trump’s deadly ignorance.

But the White House press obsesses over a second agenda, too. It must always prove that previously respected figures like Dr. Anthony Fauci and Dr. Deborah Birx, once embraced by the liberal media in their pre-Trump days, either are in revolt against their doltish boss or brain-washed into obsequious enslavement to the president. Often the media advances both antithetical scenarios near simultaneously.

The third rail for the media is that Fauci and Birx are empirical and sound mostly politically disinterested. They seek to provide Trump with scientific data about the virus to balance his incoming streams of financial, economic, military, and cultural information.

When Trump accepts their advice over objections from other advisors with competing national concerns, the two feel it was for the good of the country. When he demurs, they press their arguments as advocates of public health. And when they rarely lose an argument the two concede the president has to balance dozens of existential concerns.

In other words, it would be hard, for anyone other than the current press corps, on Monday to paint Fauci and Birx as frustrated scientists at the mercy of a moron who refuses to listen to science, while on Tuesday writing off both as Trump toadies who have joined the forces of darkness.

But that is currently the schizophrenic state of the American media. The only constant is that whatever Trump advocated, they are against, even if lives are at stake. And whatever Trump policy seems to be working for the good of the country, they either deny or ignore it.

Another irony: While the current media is the logical culmination of the liberal biases of the more polite leftwing domination of network and print media of the late twentieth century, it is now also far more vulnerable to exposure and ridicule. After all, it was progressive Silicon Valley’s creation of the Internet website and social media that have allowed truth to emerge past even media filters, truth that has largely exposed the media as incompetent, meanspirited, and increasingly irrelevant.
- April 19, 2020
Email ThisBlogThis!Share to TwitterShare to FacebookShare to Pinterest
Labels: Democratic Party, Left, News Media, Politics