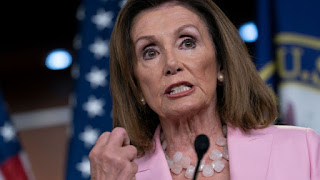 Speaker of the House Nancy Pelosi (D-CA), the architect behind Democrats’ decision to block $250 billion in additional funding to small businesses suffering because of coronavirus-related lockdowns, now says there’s “no data” to support an influx of emergency cash, even as banks are reaching their lending capacity due to unprecedented demand for aid.

Pelosi and Senate Minority Leader Chuck Schumer (D-NY) moved to block Senate Majority Leader Mitch McConnell (R-KY) from passing the emergency bill by unanimous consent on Thursday morning. McConnell had hoped that the need for assistance would be evident enough that he would not have to call Congress back from recess to vote on the measure, but Democrats disagreed.

McConnell was left incensed, noting that the $350 billion Paycheck Protection Program fund, which guarantees entrepreneurs with fewer than 500 employees low-interest loans that will be forgiven if they use the money to keep workers on the payroll, is “on track to be depleted by the end of this month.”

Treasury Secretary Steve Mnuchin reportedly told McConnell the funds are going fast and, according to Fast Company, some banks, including Wells Fargo, have actually reached their lending capacity after loaning out a shocking $10 billion in just the first week of the program — and Wells Fargo limited its loans to small businesses with 50 or fewer employees.

“Given the exceptionally high volume of requests we have already received, we will not be able to accept any additional requests for a loan through the Paycheck Protection Program,” the company said in a statement. “We will review all expressions of interest submitted by customers via our online form through April 5 and provide updates in the coming days.”

In her weekly news conference, Pelosi made the shocking claim that American small businesses are not in desperate need of help, claiming there’s “no data” to support expanding the Paycheck Protection Program.

“There is no data as to why we need the rest when there are outstanding needs,” Pelosi said, calling McConnell’s decision to bring the emergency measure to the floor a “stunt.”

But Pelosi told Anderson Cooper later that the PPP “really needs money right away, we know that, because of the demand,” according to the Hill, and acknowledged that “the $350 billion for the Paycheck Protection Program (PPP) included in the last round of coronavirus relief is insufficient to meet the demand.”

What she wants from McConnell, though, is a guarantee that the funds will help only specific Americans, according to identity, and that any new relief package will provide additional funding to cities, states, and health care systems that just received an influx of cash under the third coronavirus relief package, negotiated and passed in late March. Healthcare systems received $150 billion under the CARES act and cities received $340 billion.

“When the secretary called this morning to ask for the additional funds, we were like, we want to make sure that the program is administered in a way that does not solidify inequality in how people have access to capital,” Pelosi said.

Pelosi and Democrats want money earmarked for “community-based financial institutions that serve farmers, family, women, minority and veteran-owned small businesses and nonprofits in rural, tribal, suburban and urban communities across our country” — requirements that would complicate the first-come, first-served nature of the program with further government checks and red tape.

Of course, Pelosi and the Democratic caucus are hard at work on a separate relief package of their own, thought to cost somewhere in the neighborhood of $1 trillion.
- April 10, 2020
Email ThisBlogThis!Share to TwitterShare to FacebookShare to Pinterest
Labels: Democratic Party, Government, Pelosi