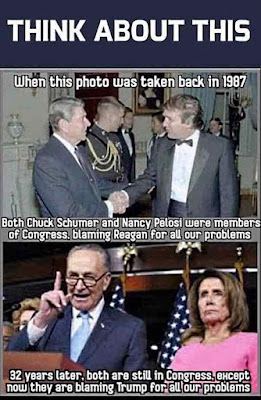 Nancy Pelosi Reveals Plan To Steal 2020 Election: In an interview with CBS News, Pelosi claimed that not supporting vote-by-mail is “not what our founders had in mind” and claimed that the effort would be something Democrats focus on in the next bill…

Michigan Gov. Whitmer facing backlash for going to 'radical extremes' with stay-at-home order: Michigan Gov. Gretchen Whitmer is facing backlash following an expansion to her state's stay-at-home order that prohibits not just public gatherings, but private ones as well -- regardless of size or family ties -- in response to the coronavirus pandemic. Whitmer’s order says residents are now prohibited from visiting family or friends, with exceptions for providing care, as the state currently has the third-highest number of COVID-19 cases with upwards of 21,000.

Coronavirus and socialism – AOC and friends peddling false cure for what ails US: Many times, when Reps. Alexandria Ocasio-Cortez and Ilhan Omar talk, it’s their lips that move but the voice of Karl Marx that comes pouring out...The coronavirus outbreak is a perfect example of why the government should not be charged with managing even greater parts of the economy.

MSM “Speculation”: Fauci On The Way Out After Trump Retweet: Reading the future in RTs! Reuters, the New York Times, and other national media outlets report that Donald Trump has fallen out with Anthony Fauci on the basis of this tweet from the president.

Hysterics on CNN: ‘People Are Dying' Because Trump 'Acting a Fool': CNN’s so-called “Reliable Sources” was known for being a place where professional journalism was shunned in favor of hysterics and theatrics. During Sunday’s edition of the show, frequent guest David Zurawik, a media critic for The Baltimore Sun newspaper, was unhinged from the get-go as he blamed the over 20,000 Wuhan Virus deaths in the U.S. on President Trump, who was “acting a fool” according to him.

Bill Maher Slams Liberals Trying to Shield China Over COVID-19: On Friday's Real Time show on HBO, host Bill Maher delivered another of his lectures against his fellow liberals on the issue of political correctness as he argued that they should stop trying to shield China in its culpability for allowing the deadly COVID-19 virus to get out by claiming that valid criticisms of China are racist.