Stocks tipped slightly into the red on Friday to break a five-session win streak, but clinched a solid week of gains in which the Dow rose 2.4%, the S&P 500 added 2.5%, the Nasdaq jumped 3.5% and the Russell 2000 rallied 4.8%. The week was also the calmest in three months, as the S&P 500 did not post a move greater than 1% in either direction during any day, the longest quiet period for traders since early October.

In the bond pits, the two-year U.S. Treasury ended the week at 2.55% and the 10-year yield settled in at 2.70% following a market-friendly consumer inflation report posted on Friday. WTI crude oil snapped a nine-day winning streak with a 1.9% decline on Friday to $51.59/bbl.

Next week's big events include the Detroit Auto Show and the Super Bowl of retail conferences.

Don't let the short-term rally fool you. Pay attention. In 2008, when the market went into bear territory, there were 10 straight days of gains before moving down again. Not saying this will happen again, but be vigilant. 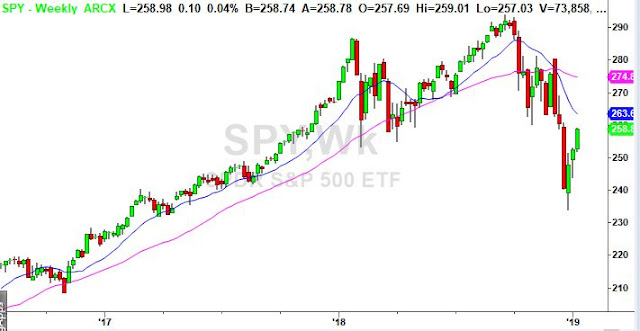