I thought that headline would be sensational enough to get your attention. But it has some truth to it.

You might not realize it yet, but all the "free" programs that are being promised by Democratic presidential candidates all come with a price tag. And you may also not realize it, but the "rich" don't have enough money to pay for it all.

Dr. Daniel Mitchell, an economist and Chairman of the Center for Freedom and Prosperity, says:

"Lower-income and middle-class taxpayers need to realize that they’re the ones with bulls-eyes on their back."

The plans laid forth by Warren, Sanders, Harris and others use what Mitchell calls "sloppy math." 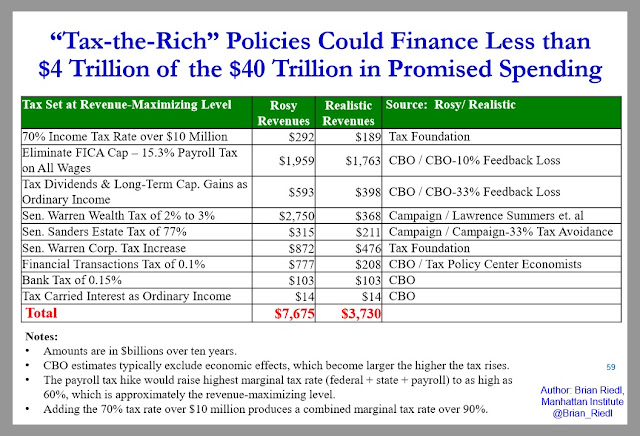 During an "interview" with Stephen Colbert on the Late Show, Elizabeth Warren said this when asked How was she going to pay for "Medicare for All."

“So, here’s how we’re going to do this,” she started. “Costs are going to go up for the wealthiest Americans, for big corporations… and hard-working middle-class families are going to see their costs going down.”

Where have we heard that before? Remember, Obamacare was going to lower the average cost of health care by $2,000 per family. Did that happen?

Bernie Sanders, the guy who “wrote the damn bill” isn’t so squeamish. He admitted in July that tax increases for Medicare-For-All could go as high as $10,000 per household. Not just for the millionaires and billionaires. For middle-class families.


So brace yourselves for a value-added tax, a carbon tax, a financial transactions tax, and higher payroll taxes. Brian Riedl of the Manhattan Institute just released his Book of Charts.

It would be wise of you to be familiar with this information.