The Next Bear Market Could be Worse than 2008

Why do I believe this bear market could be a bad one? According to a May 2019 report by the Federal Reserve, tens of millions of American families are on the edge of economic oblivion based on the following:
I’m also concerned by a Pew Center report that says that more Americans are living month-to-month in rental housing than at any time in the last fifty years. Why is this an issue? In times of trouble, people often rely upon home ownership to help them out, by borrowing against home equity loans, etc. That assistance won’t be there for renters.

And it’s not just individuals who have massed mountains of debt—it’s countries, including ours. If incomes drop, and people (and/or countries) default on their debts, we could be in for big economic trouble.

Are you prepared for an event like that? Do you have a plan that addresses the potential for a bear market? I strongly believe you should.

Have a strategy to get out of the market, especially if your close to retirement, or currently retired. One such strategy, while not perfect, is to sell when the market index (such as the S&P 500) moves 2 or 3 percent below it's 200-day moving average. The chart below uses this strategy. It is not perfect -- no system is -- but it can help you avoid large losses to your portfolio. 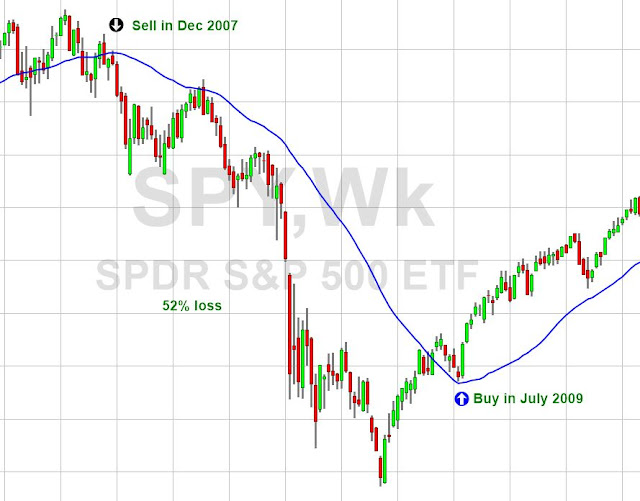 What's more important is to design a strategy now. Protect your principle and do not suffer huge losses.

Note: I learned of this strategy from Ken Moraif, from Retirement Planners of America. Much of this article was written by Ken.
- September 08, 2019
Email ThisBlogThis!Share to TwitterShare to FacebookShare to Pinterest
Labels: Markets