Initial claims for unemployment insurance totaled 4.43 million for the week ending April 18, marking the fifth consecutive week of massive, record-shattering layoffs, and dwarfing the previous high of 695,000 in October 1982. However, on a positive note, the latest tally is the third week of declines in the number of initial claims since the 6.87 million claims during the week of March 27.

During the Great Recession in 2008-09, total job losses were 8.8 million over 25 months versus the current 5-week total of 26.5 million initial claims. The unprecedented flood in claims is the leading edge of a tsunami of negative economic statistics that reflect the impact of the COVID-19 outbreak and the drastic policy reactions implemented to contain the spread. 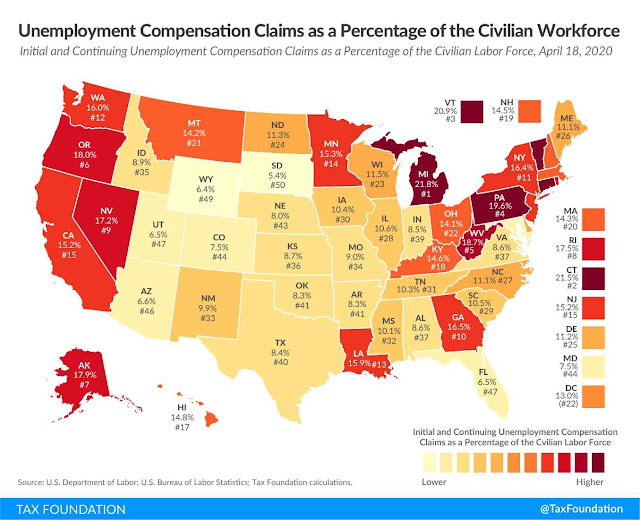 Total inventory of new single-family homes for sale increased 2.8 percent to 333,000 in March, pushing the months' supply (inventory times 12 divided by the annual selling rate) up to 6.4, up 23.1 percent from February and 10.3 percent above the year-ago level.

Since home buying is often a long process, the sales recorded for March were likely initiated before the worst of the outbreak. It is probable that home sales over coming months may see further sharp declines.

The outbreak of COVID-19 and government policy responses have resulted in massive distortions to economic activity including a sharp rise in layoffs, plunging consumer confidence and retail spending, and declining housing market activity. Expect extraordinarily weak economic reports over the next several months.
- April 24, 2020
Email ThisBlogThis!Share to TwitterShare to FacebookShare to Pinterest
Labels: Economics, Real Estate