The Great Shutdown: We're in a Recession (Depression?)

The collapse of oil

The front-month May WTI contract plunged as much as 23% overnight to under $15/bbl, the lowest level since March 1999, after losing almost a fifth of its value last week. Production cuts agreed by top producers are barely making a dent in the demand destruction wrought by COVID-19 as the world rapidly runs out of places to store crude. While the May contract expires tomorrow, adding to reasons for prices to crater, the June WTI contract also fell more than 7% to $23/bbl (the spread is usually around $0.50 - it's now around $8-10). Besides the crude slump, U.S. stock index futures are off by 1% as investors look ahead to a busy week for earnings (nearly a fifth of S&P 500 companies report) and gauge the early financial effects of the coronavirus pandemic.

US retail sales fell a record 8.7% in March, the Commerce Department said Wednesday. The previous record slump for any month was a 3.8% fall in November 2008.

Food and beverage stores were one bright spot, gaining 25.6% from February, as US consumers stocked up on supplies for the coronavirus lockdown.

The decline was led by motor vehicle output, which slid 28% in March, according to the report. Utilities fell 3.9%, while mining output slumped 2% in the month. Across market groups, all recorded declines in March, the report showed. 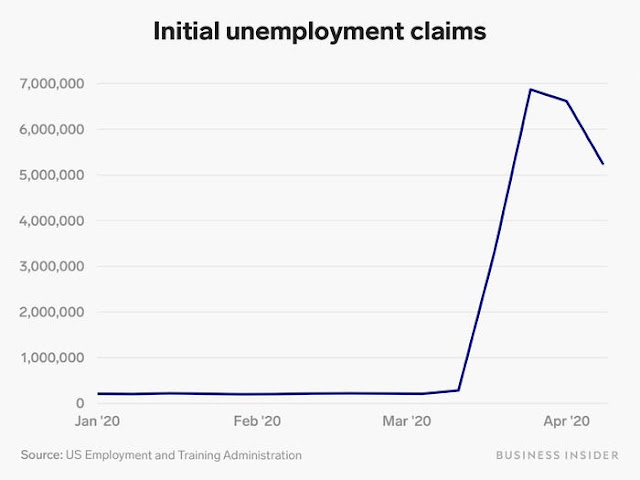 US weekly jobless claims were 5.2 million for the week ending April 11, the Labor Department said in a Thursday report. Claims declined slightly from the previous week, when 6.6 million Americans filed for unemployment insurance.

While this showed a positive declining trend, it brought the four-week total of displaced American workers filing for unemployment to 22.03 million. That means that coronavirus-related layoffs have effectively erased the 22 million jobs that the US economy added since the post-Great Recession recovery starting in mid-2009.

US housing starts plummeted by 22.3% in March, the Commerce Department announced Thursday. The decline is the largest since 1984.

It shows that the housing market has deteriorated rapidly amid the coronavirus pandemic. Homebuilders had been operating at decade highs as recently as January before the global health crisis forced business closures and outsized job loss, and signaled a likely recession would soon hit the US.

Why are we still on lockdown?

Across the nation, state and local governments have used the Wuhan virus scare to take draconian measures to curtail civil liberties. Some states, like the fascist paradise of Gauleiter Gretchen, have forbidden the sale of garden seeds and child passenger safety seats as non-essential. She has forbidden Michiganders from traveling from one residence in the state to another residence. Over Easter, states and municipalities across the country directly banned religious services. Not merely services in a church, but services in a parking lot. Curfews have been imposed because, I guess, viruses are more active at night. California is filling in skate parks.

There are plenty of other draconian policies that are not necessary.

None of these policies, none, not a single one, make you safer or prevent the spread of the virus. They are nothing more than government-ordained virtue signaling. It is not sufficient that you don’t become infected with Wuhan virus or that you observe a correct treatment protocol if you are infected, you must do it in the correct way and you can’t be allowed to enjoy anything while the mandated lockdown period goes on. To be effective, the policy must make you as miserable as possible. What all these policies have in common is that they are calculated to impress upon you that your ability to move, to shop, to travel, to work, to wear what you wish, to engage in legal activities, to congregate, to worship or just to f*** off a bit are all dependent upon some level of government deciding that no emergency exists.

Now that we’ve eliminated a good swath of the Bill of Rights with barely a whisper from the citizenry and with total cooperation of the media, ostensibly to protect us all from virus, do you really think government, having learned this lesson, is going to stop using this power any more than a tiger who has tasted human flesh is ever going to forego it again?

Right now we are in a perfect storm of fear and cowardice and stupidity. The modelers who drove this bullsh** frenzy desperately need to not be exposed as the buffoons they are. Politicians and the media who have fanned the flame need a body count to justify their abuse of power. Corrupt governors are trying to turn this crisis into a profit center to shore up budgets that are now dangerously out of kilter because they’ve destroyed the economies of their states. And we are all going along with it because we are either too scared to see this for what it is or we’re too cowardly to say enough is enough and f*** these people and their face masks and ‘social distancing.’

In the county where I live, with a population of 500,000, there are less than 150 confirmed cases. Yet we're in total lockdown, an environment which will take years to recover. Many small businesses will close up forever. But people are safe from the virus. More people died from the flu.